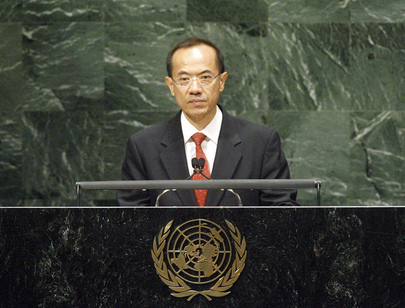 GEORGE YEO, Minister for Foreign Affairs of Singapore, said that the Group of 20 (G‑20) had been formed two years ago when the global economy was facing the abyss and, without it acting in concert, the economic crisis could have led to a global depression. Going forward, the G-20 needed to go beyond the reform of the international financial institutions and better coordination of fiscal, monetary and exchange rate policies. Without a fundamental restructuring of the real economy, a double dip might be experienced, and increased liquidity in the global system could end up creating new asset bubbles, as was already being seen forming in Asia. For that restructuring to take place, the international trading system needed to be kept open. Only then could markets make adjustments and prices find their right levels. In fighting protectionism in all its forms, leadership by the G‑20 was critical. If, for lack of political will, the Group was unable to avert the crisis of a second dip, that crisis would, in the end, force it to act, but by then at much greater human cost.

“Precisely for this reason, we must not allow interest in the Doha Development Agenda to flag,” he said. When that round was launched in November 2001, a key consideration had been development. For Singapore and many others that had been in Doha during the negotiations, the Millennium Development Goals were uppermost in their minds. It had now been 10 years since the Goals were launched. While some countries had done well, many others had not. The G‑20 countries, in their deliberations, should take into account the interest of all countries, not just theirs. They should play a leadership role in breaking the current impasse in the Doha Round negotiations. It was important to ensure that the needs of developing countries, especially those of the least developed countries, were met. Freeing up agricultural trade, for example, would also make a huge difference to their welfare.

With those concerns in mind, a loose grouping of countries calling itself the Global Governance Group, or 3G, had been established a year ago, he went on. Its basic stance was to support the work of the G-20 and to hold it accountable to the general membership of the United Nations. A major concern of the 3G countries was development. In that regard, they had prepared inputs to be submitted to the G-20 Working Group on Development. He added that “development is not principally about aid”. Whether a people was able to lift itself from the depths of poverty depended more on internal than external factors. Good governance, of course, was paramount. Investing in the inherent potential of citizens and creating a favourable environment for that potential to be realized were central to good governance. A critical element in good governance was education. With education, individuals were able to acquire the information and knowledge they needed to add value to the world and insist on democratic safeguards to prevent the abuse of power.

Taking advantage of globalization and information technology, education could now be spread to remote corners of the world, he said. Mobile phones, for example, had altered traditional power relationships, and social networking infrastructures like Facebook were “radically changing the world we live in”. Thus, when development was discussed, “the key is education”. It was, therefore, necessary to make sure that basic conditions were met and that children were fed and healthy, and that no group was discriminated against on the basis of ethnicity, religion and gender. The knowledge for development was already available in the world and the delivery systems could be put in place. Unfortunately, there were many obstacles impeding that flow of knowledge. Protectionism was a major obstacle. It slowed the spread of education and knowledge, and the inability to move the Doha Development Agenda forward had been particularly injurious to the least developed countries. As a group, those countries made up 12 per cent of the world population, but accounted for less than 1 per cent of global gross domestic product (GDP). “That we allow this situation to continue is a sad reflection of our solidarity as a community of nations,” he said.