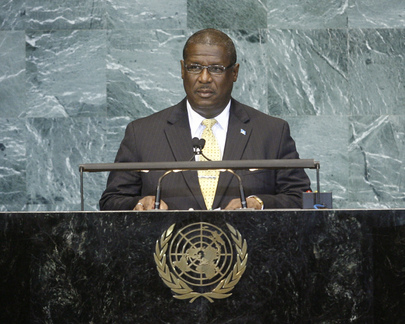 STEPHENSON KING, Prime Minister of Saint Lucia, zeroed in on two critical factors facing the development of the small island development States: global climate change and the uncertain economic and financial crisis. Like all Member States of the Caribbean Community, Saint Lucia was committed to achieving an ambitious, just and legally binding agreement to address climate change, which meant that the countries most responsible for carbon dioxide emissions took the steps to reduce their emissions and provided adequate financial resources for the development and transfer of technology for both adaptation and mitigation to the most seriously affected countries. Without sufficient financial and personnel resources to correct the negative impact of climate change, developing countries would have to divert funding from poverty alleviation programmes. The World Bank estimated that the annual impact of potential climate change on all Caribbean Community countries would be approximately 11.3 per cent of total gross domestic product (GDP). He urged development partners to make a firm, collective commitment to provide new and additional resources and not to renege on prior promises.

Turning to global economic issues, he said the international economy’s quick return to sustained growth was the other critical factor in the development of small island developing States. Weakened prospects for growth in the United States and Europe could impede growth in emerging markets, as exports and investment flows slowed. The United States and the European Union were also major sources for tourism, agricultural trade, ODA, foreign direct investment and remittances, the mainstay of Saint Lucia’s economy. As a small island developing country with an open economy, Saint Lucia had been hit hard by the global finance and economic crisis and that had had led to a contraction in its GDP, increased unemployment and a weakened fiscal position. To mitigate those economic shocks, Saint Lucia had implemented several measures to protect its most vulnerable people. That had included the creation of short-term employment programmes, the suspension of import duties and other taxes on basic consumer items, controls on the mark-ups of retail products and profit margins on some basic food items and provisions for limited price subsidies on basic commodities for vulnerable groups. The Government was also developing a medium-term development strategy plan for 2011-2016 to lay down the blueprint for the development of new sources of economic growth, such as health and wellness tourism and high-end technology. It wanted to expand critical sectors, such as tourism, agriculture and manufacturing. The international community’s support was necessary for Saint Lucia and all small island developing States to fulfil sustainable development goals and meet all the Millennium Goals by 2015.

Turning to security issues, he said the international community must find solutions to the use of illegal firearms and the uncontrolled illicit drug trade. Saint Lucia was perplexed by the closure of the United Nations Office for Drug Control (UNODC) office in the Caribbean and called for a reassessment of that decision. He also called for a comprehensive arms trade treaty, alongside the Treaty on the Non-Proliferation of Nuclear Weapons. He asked the Assembly to support the desire of the “Republic of China ( Taiwan)” to collaborate with the world by participating in international organizations. The political embargo against Cuba was an anachronism that had been put in place to deal with a political issue and now was being used for economic strangulation. “Our region is diverse, but our aspirations are common. Only mutual respect will foster that relationship that is so necessary and vital to the development of our region”, he said.