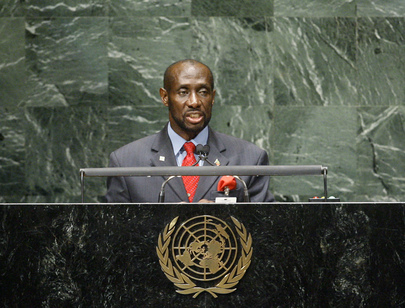 SAM CONDOR, Deputy Prime Minister and Minister of Foreign Affairs of Saint Kitts and Nevis, said Governments grappling with global problems today were doing so as the established centres of power shifted, pushing them to reconcile the pursuit of statecraft and national interests within the context of rapidly changing relations between and among States.  In addition, the economic and financial crisis had undermined confidence in financial markets, increasing poverty across the world and reducing confidence in governance methods.  In pursuing national agendas, “we ought to be mindful of the common interests and the links that merge our societies”, he said.  Against that backdrop, commensurate emphasis must be placed on making the United Nations more involved with regional organizations, enabling them to implement people-centric agendas.

He said the Organization should play a more pragmatic role in strengthening relations and expanding collaboration among States, regional integration systems and international financial institutions.  Indeed, the United Nations must remain a vital nexus, fostering the necessary partnerships and, to that end, States must make it more representative, allowing developing countries, as well as smaller economies, a more visible presence on the global stage.  With improved partnerships, the Organization could bring global business communities, civil society and States together in a more structured way.  His Government recognized the United Nations reach in helping build capacity amid challenges, including “brain drain”, which robbed developing countries of invaluable human capital.

He encouraged States to embrace the idea of a “multipronged” partnership as a way to enhance development and strengthen global accountability, he said, thanking the Government and people of Taiwan for their continued development assistance over several decades.  He also urged parties in the dispute settlement case before the World Trade Organization, which involved Antigua and Barbuda, to quickly arrive at a negotiation settlement that was fair and just to that country.  On climate change, he said the regularity and ferocity of natural disasters was a particular concern for the small island developing States.  Coordinated approaches should be developed jointly with financial institutions and insurance companies, among other stakeholders.  Enhanced disaster preparedness and mitigation measures must be built into national development strategies.  His country was committed to such an approach through capacity-building and the creation of internal mechanisms to ensure effective response.

Turning to global health, while he applauded the Assembly’s adoption of a resolution on the prevention and control of non-communicable diseases, he noted one issue that required more attention:  interpersonal violence and its implications for development, health, security and governance.  Data showed that such violence accounted for 4,300 deaths a day — one every 20 seconds — and he requested that a text on that matter be tabled on the Assembly’s 2011 agenda.  As for efforts to develop human resources, Saint Kitts and Nevis was preparing its youth in math, science and entrepreneurial skills, among other disciplines, to equip them for opportunities created through policies and legislation.  Applauding the creation of UN Women, he said women’s occupation of high offices and decision-making roles had been the norm in his country and the Government was ready to share its experience in that regard.  In closing, he urged delegates to “do the things that ought to be done” to position the United Nations for delivering its best.