H.E. Mr. Joseph Deiss, President of the 65th Session of the General Assembly 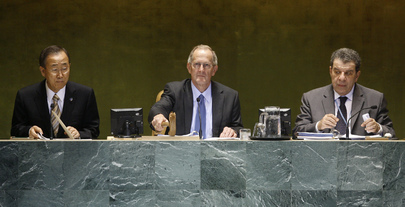 JOSEPH DEISS, President of the General Assembly, said the effects of poverty, conflict, global warming, the economic and financial crisis and other challenges could not be addressed without shared global strategies. That was why he had put forward “reaffirming the central role of the United Nations in global governance” as the theme for this year’s general debate. The United Nations had a unique legitimacy for such a role, with its 192 Member States and its purpose to promote the rights of every man and woman in the world. It also had the necessary expertise and presence on the ground to play that central role, as evidenced by its peacekeeping missions, humanitarian work, disaster relief, and a host of critical activities “well outside the spotlight”.

“Yet the United Nations is in danger of being marginalized by the emergence of other actors on the international stage,” he said, adding that the world body was also criticized as too inefficient and ineffective. The feeling seemed to be that urgent action on key issues could be taken more quickly and easily in a smaller forum. There was no question of challenging the role of bodies like the Group of Twenty (G-20); the economic and financial crisis showed the importance of a fast, coordinated response.

However, he said, the United Nations had to act, and act urgently, to connect with the efforts of others, improving cooperation between bodies and countries that were not members of them. That was a task that only the United Nations and the General Assembly could fulfil. To maximize the Organization’s ability to play a global governance role, “we must work to make it strong, inclusive and open”, building a strong link between States, the private sector, civil society and regional players. Making the United Nations strong required Member States to be decisive in pursuing reform, including revitalization of the Assembly, reforming the Security Council, and reviewing the operations of the Human Rights Council and the Peacebuilding Commission.

“It is up to you, the Member States, to make the United Nations strong and able to play a central part in facing global challenges,” he declared. Making the Organization strong required it to be decisive in pursuing reform, but also fully exploit the potential of its economic organizations so they could fulfil the role they were established to perform. He invited States during the general debate to share their views on inclusive global governance. The United Nations was expected to act with more efficiency and unity, and it needed to find the ideal combination of legitimacy and effectiveness. It was up to Members to determine how to make rapid progress towards a worldwide partnership in which all countries feel included in a united and effective pursuit of a better world.