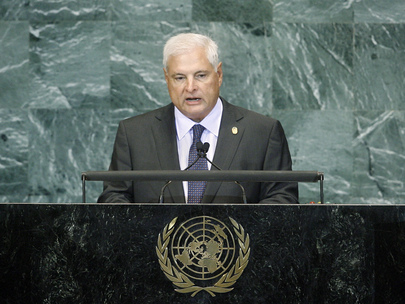 RICARDO MARTINELLI BERROCAL, President of Panama, said his country’s geography allowed it to fulfil the functions as a bridge and meeting point of the most diverse cultures and civilizations. Thanks to the opening of the Panama Canal in 1914, the country now connected Europe, America and the East. It still worked for the benefit of the world’s maritime commerce.

Moving on to other topics, he noted that the trafficking and possession of illegal weapons had a devastating effect on human security and governance. For Panama and Central America, drugs were the region’s “weapons of mass destruction”. Additionally, the region was being used by webs of human traffickers that steer mixed migratory flows of persons from other continents through its borders. In the face of those challenges, Panama and members of the Central American Integration System decided to create a Regional Security Coordination Centre. Such regional efforts, based in Panama, were yielding encouraging results.

He defined globalization as the safe, legal and efficient flow of services, goods, capital and persons. This fact had been the catalyst for a period of convergence of different economies which would last for some years to come. As a result of that convergence, he said: “We have suffered during the past two years the effects of a significant crisis.” Panama was still expanding its commercial relations through the negotiation of Free Trade Agreements with Peru and Colombia. Thus, he asked for the support of respective Governments, with a view towards the approval and ratification of free trade agreements with Canada, the United States and the association agreement between Central America and the European Union.

Lastly, he touched on other issues, including Panama’s signing of agreements to avoid double taxation and prevent tax evasion. “We want to portray the Panamanian experience as an example to the world. Our economic story, reform at home, and strengthening trade and business ties across the region and around the world, have been fruitful.”

He reaffirmed commitment to the Millennium Development Goals, and noted that Panama had developed structural reforms and programmes to attend to the needs of the people. Specifically, he mentioned programmes for the elderly who did not have pensions, a system of universal scholarships, economic support for students, and a pay raise, which benefited labourers in the public and private sectors. In addition there would be an investment of $13 million for public infrastructure, such as hospitals, roads, and buses. He reiterated the conviction that the United Nations was the international forum for the exchange of ideas and it should adopt measures that strengthened the pillars of governance. “Rest assured of our disposition to offer all the peoples of the planet the best possible service and utility and as a result, develop our citizens,” he said.