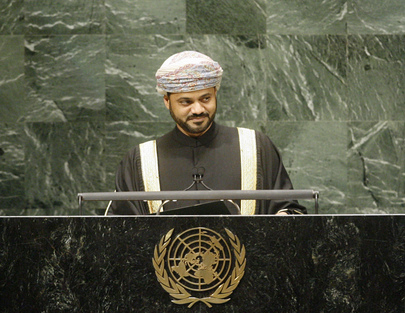 SAYYID BADR BIN HAMAD BIN HAMOUD AL-BUSAIDI, Secretary-General of the Ministry of Foreign Affairs of Oman, said that the international community met in challenging times, faced with a full range of complex issues, from political instability to security challenges, financial crises, economic and environmental problems, to the nuclear question and non-proliferation. For those issues, the only solution lay in dialogue and positive participation, aimed at arresting the dangers that threatened international peace and security. The floods in Pakistan, which had displaced more than 20 million Pakistanis, were still causing tremendous suffering. Despite international rescue efforts, more outside assistance, expertise and capabilities were required.

He said that those floods, the volcanic eruption in Iceland and the H1N1 epidemic were just recent phenomenon highlighting the interconnectedness of all peoples, and demonstrated the vital need for international support. While the international community had not been able thus far to resolve some complex political problems, the United Nations offered multilateral mechanisms and objectives, which played an enormous role in the reduction or neutralization of many crises, and helped developing countries in numerous and specialized fields, as well as protecting the environment.

Oman looked forward to a day when dialogue prevailed on the basis of acceptance, regardless of social and cultural differences between human communities, he said. In the context of development, Oman was dedicating resources in the fields of education at all levels and medical care for every individual in the Sultanate. The role of the Omani citizen in development was central, and stemmed from the conviction of Sultan Qaboos bin Said that life was created for mankind, male and female, and that freedom was the core of life, with free positive expression as the seed of creativity and the fuel of development.

His country believed strongly that a solution to the conflict in the Middle East was imperative, he said. While supporting the direct negotiations between the Palestinians and Israelis, facilitated and sponsored by the United States, he said that Israel’s policy was vague in accepting responsibility towards the requirements of peace. Peace would entail the establishment of an independent, sovereign and viable Palestinian State, with East Jerusalem as its capital, and the withdrawal of Israel from all Arab land to the borders of 4 June 1967. He looked forward to the active, positive and continuing role by United States President Barack Obama, in order to reach a just and comprehensive settlement.