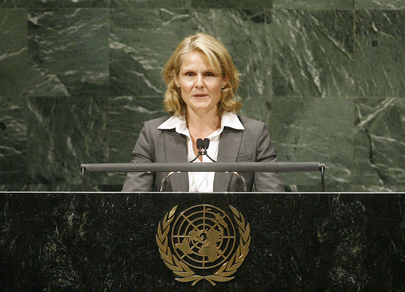 TINE MØRCH SMITH ( Norway) reminded the Assembly that the Organization was global in character, and as the challenges were global as well, what was required was inclusive global forums in which to address them. “The United Nations is not designed to comfort different leaders in their own convictions — it is the place to confront and surpass differences,” she said, stating that it was inappropriate to use the podium to express extreme views or unfounded claims. As a global community facing shared risks and threats, it was essential that efforts not be derailed by “attempts to incite conflict”.

Turning to the work of the Secretary-General’s Advisory Group on Climate Change, which the Prime Ministers of Norway and Ethiopia chaired together, she stated that great efforts were being made towards raising funds committed at the Copenhagen Conference. Norway was also focusing on reducing emissions from deforestation, notably following up commitments made in Bali, where it pledged up to $500 million annually since 2007 to halt deforestation. It was working with key partners such as Brazil, Indonesia and Guyana where development of concrete methods were showing progress. She urged all Member States to follow suit.

She then echoed the vision voiced by United States President Barack Obama when he expressed hope in his address to the Assembly that Palestine become a member of the United Nations as an independent and sovereign State. The Ad-Hoc Liaison Committee, chaired by Norway, had requested that the Palestinian Authority assist in implementing the Programme for the Thirteenth Government for completing the building of a Palestinian State, and there were encouraging reports that the reform agenda has accelerated in the first half of 2010. While regretting Israel’s recent decision to not extend the moratorium on settlement construction, she affirmed Norway’s commitment to a two-State solution and for the full compliance with road map obligations.