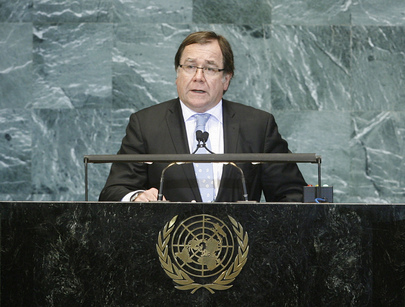 MURRAY MCCULLY, Minister for Foreign Affairs of New Zealand, said his country’s future was closely tied to that of Europe, and Asia and the Pacific. In addition to its indigenous Maori, its remaining population was a mix of people from those regions. New Zealand was focused on the security and development of the South Pacific, the region to which it belonged. It was gravely concerned that its region was second only to sub-Saharan Africa in terms of lack of progress towards achieving some of the Millennium Goals. “We want to see the Millennium Development Goals achieved, and we want to see the wider Pacific prosper through good governance and sustainable economic development,” he said.

To that end, his country had increasingly deployed its resources in its region, he said, affirming that New Zealand would continue to increase its level of development assistance, despite its economic challenges. However, money alone was not enough, and he underscored the need for aid effectiveness, donor coordination and good governance. Events of the past year, such as an earthquake in Christchurch — the most destructive in 80 years — had reinforced the need for better disaster management. His country’s experience with major earthquakes had taught it how to mitigate risks, and it was working with the United Nations, non-governmental organizations and other international organizations to share those lessons.

Turning to the issue of security, he noted that peacekeeping was a key responsibility of the United Nations. New Zealand was committed to supporting global security, and had been engaged in several peacekeeping and peace-support operations since the 1940s. His people were among those affected by terrorism, he said, pointing to the need to address the conditions in which terrorism thrived and respond to those who perpetuated such atrocities as the 11 September 2001 attacks. He strongly supported peacekeeping reform; the surge in peacekeeping since 1990 had opened up a discussion on the way the United Nations conducted its peacekeeping operations.

He said that in order to effectively counter terrorism and maintain peace and security, coordinated, collective action was needed, for which the United Nations was best suited. He welcomed the adoption of the action plan at this year’s Review of the Treaty on the Non-Proliferation of Nuclear Weapons, as well as the Nuclear Security Summit and the entry into force of the Convention on Cluster Munitions as “tangible and practical successes”. New Zealand was also concerned with global environmental issues, and called for a scientific breakthrough to the challenge of producing more food while reducing emissions.

Although much global economic progress had been made, he said, his country was frustrated that there was still no conclusion to the Doha development round of talks. He reminded the Assembly that the single most effective step that could be taken to advance the position of the world’s disadvantaged would be to create a framework within which they could trade themselves to a better future. In conclusion, he strongly endorsed United States President Obama’s statement of yesterday with regard to the conflict between Israel and Palestine. He asked that Israel heed the international community’s call to extend the moratorium on settlements and enable an atmosphere for direct negotiations to continue. Resolution of the Palestinian question would “tear out the fuse that threatens to ignite conflict in the Middle East and beyond”.