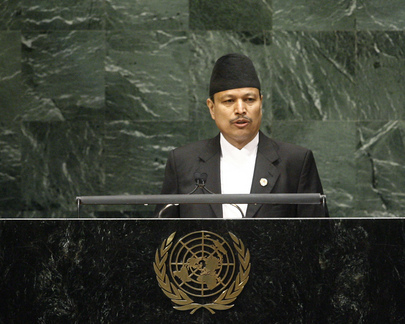 BHIM BAHADUR RAWAL, Minister for Home Affairs of Nepal, said that the recent summit on the Millennium Development Goals had “rekindled our hope” of a different world in 2015. Recognizing the complex and multiple challenges to international peace and security, he stressed that development, peace and security were inextricably linked. He then urged that making the Comprehensive Nuclear-Test-Ban Treaty (CTBT) operational and the early conclusion of a fissile material cut-off treaty be priorities in the work of the international community.

Turning to the reform of the Organization he called for a systematic and holistic approach, including the expansion of the Security Council with membership that reflected current realities, as well as the institution of transparency in its working methods. Furthermore, the role of the Economic and Social Council should be enhanced in its work of promoting global economic relations and advancing the development agenda and, in that regard, he welcomed the Development Cooperation Forum and Annual Ministerial review.

Nepal had, he stated, “extended unflinching support to all major [United Nations] initiatives”, and in 2008 celebrated its fiftieth anniversary with the Organization. He pointed out that currently there were 5,000 Nepalese peacekeepers working in 13 different peacekeeping missions around the world. He proudly noted that Nepal had put forward the candidacy of Kul Chandra Gautam, adviser to the Prime Minister of Nepal on the Peace Process and International Affairs, as President of the sixty-sixth session of the General Assembly.

As a least developed country, Nepal was affected disproportionately by the realities of climate change, he said. Landlocked, and with the Himalayas as a source of fresh water for more than 1 billion people living in South Asia, Nepal was highly vulnerable to the effects of climate change. Global warming had caused melting snow, and about two dozen glacial lakes risked bursting, causing huge loss of lives and property. Contributing the least to climate change, yet being impacted disproportionately, Nepal was implementing afforestation programmes, the use of alternative energy sources, as well as hydropower generation. However, there was an “an urgent need to make progress on climate negotiation through ambitious and comprehensive” outcome in Cancun later this year.

International responses to the special needs and concerns of least developed countries, including the Brussels Programme of Action, had been of “limited success”, he said. Impacts from the global food, energy, economic and financial crises, on top of the adverse impacts of climate change, impeded the development of Nepal and other least developed countries. In order to overcome the challenges, a renewed and scaled-up global partnership was needed, including the fulfilment of all ODA commitments, enhanced provision of duty- and quota-free market access and an early conclusion of the Doha Round, to name a few. Debt relief, increased flow of foreign direct investment and technology transfer, among others, were also critically important to ensure resources for financing sustainable development.

He then spoke of the “arduous transition from a 10-year long conflict” through the ongoing and complex peace process in Nepal and the “remarkable progress” since signing the Comprehensive Peace Accord in November 2006. Today, Nepal was a federal democratic republic, with a 601-member Constituent Assembly that was one of the most inclusive assemblies, and where women constituted one third of its total members. Regarding the integration and rehabilitation of the former Moaist combatants, he announced an agreement between the Government and the Unified Communist Party of Nepal (Maoist) to complete the process within four months. Offering appreciation and thanks to both national stakeholders and international support, specifically the United Nations Mission in Nepal (UNMIN), he affirmed his country’s commitment to the work of the United Nations.