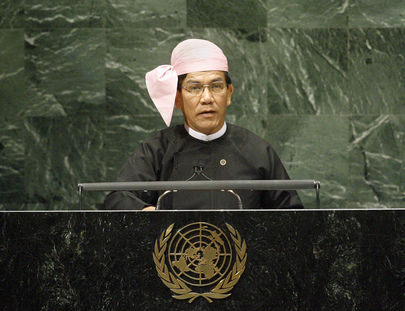 U NYAN WIN, Minister for Foreign Affairs of Myanmar, said there was no doubt the United Nations was the best forum for addressing the world’s challenges. While the United Nations had devoted most attention to peace and security, new global challenges such as climate change, poverty, hunger, water and energy insecurity demanded urgent and careful actions. Yet the world was also full of injustice, conflicts, interference in internal affairs and attempts to impose domination on developing nations. Myanmar stressed the pressing need for strengthening the United Nations to make it more democratic and effective to meet growing challenges, firmly believing that reform must reflect increasing membership. The Security Council had to become more transparent and efficient, and Myanmar supported expanding both categories of its membership.

The international community also had to step up its efforts to realize the Millennium Development Goals by 2015, and Myanmar welcomed the successful recent High-Level Plenary Meeting on the Goals. Important global improvements have been made, but progress remained uneven and varied from region to region. International assistance played an important catalytic role in developing countries’ development efforts and Myanmar emphasized indiscriminate fulfilment of development assistance, increased investment, market access and resolving debt problems were essential to meeting the Goals. It was time to remove unjust economic coercive measures and trade embargoes that hampered the attainment of the Goals and hurt people, he said. Despite challenges, Myanmar had made certain progress achieving the eight Goals, especially in the fields of poverty alleviation, food security and promotion of education and health.

As a party to the NPT and the Treaty on the South-East Asia Nuclear-Weapon-Free Zone, Myanmar recognized the legitimate right of every State to use nuclear energy for peaceful purposes. It firmly opposed proliferation or production of nuclear weapons and strongly supported any efforts towards a nuclear-weapon-free world, and heartily welcomed the signing of the new treaty by leaders of the United States and Russia to reduce their respective nuclear arsenals. Myanmar was also working closely with other countries on the fights against transnational crimes, terrorism and prevention and response to pandemic diseases, which required a global solution and concerted action.

Unprecedented frequency and severity of recent natural disasters testified climate change was a pressing global threat. Myanmar was also a victim of climate change when it was hit by devastating Cyclone Nargis in May 2008, but was pleased to say international community aid helped it successfully rebuild affected areas. To address climate change, harmful emissions must be direct, but financial resources and transfer technologies must also be provided to developing countries. Industrialized countries were mainly responsible for climate change, but developing countries were most severely affected by its consequences. Turning to political developments in his own country, Myanmar was also at the critical phase of its political transformation, with multi-party elections set for 7 November A total of 37 political parties, including those representing various ethnic groups, would take part in the vote, with more than 3,000 candidates contesting a total of 1,171 seats at the People’s Parliament, National Parliament and State/Regional Parliaments. Such large participation made it clear that the elections were virtually inclusive. Myanmar was committed to holding free and fair elections for the best interest of the country and its people, and its new Government would emerge to maintain and strengthen friendly relations with all nations and work more closely with the United Nations.