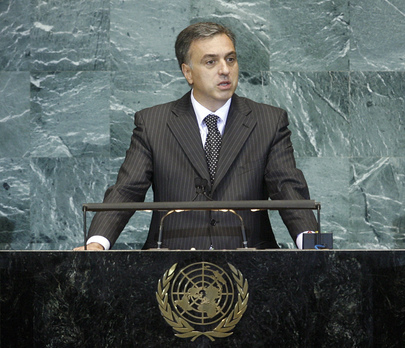 FILIP VUJANOVIĆ, President of Montenegro, noted that as the youngest member of the United Nations, the nation had proved to be a reliable partner and had ensured the quality of its reforms. He welcomed the adoption of the General Assembly resolution on system-wide coherence and the timely initiative of the General Assembly to put on the agenda of this year’s general debate the reaffirmation of the central role of the United Nations in global governance.

Regarding Montenegro’s foreign policy priorities, namely European and Euro-Atlantic integrations, he noted that the nation harmonized its policy with the European Union foreign policy approach, taking into account specific national interests. “Our best contribution is to continue to have a constructive role as a factor of stability in the international community, especially in the Western Balkans and South-East Europe.” He expressed support for United Nations efforts to implement the Global Counter-Terrorism Strategy, as well as for its efforts to fight corruption, organized crime, illicit traffic in narcotic drugs and trafficking in human beings. He also underlined his appreciation for United Nations peacekeeping missions, saying “a decades-long experience in peacekeeping operations confirmed the justification and relevance of this concept and strategic policy of the UN”. Montenegro was continuously enhancing its participation.

Recognizing the crucial importance of the Millennium Declaration and the achievement of the Millennium Development Goals, Montenegro supported the implementation of all of the Organization’s relevant strategies and programmes, he said. As a country in the process of the European integration, Montenegro also supported partnerships between the European Union and Africa, as well as all efforts to solve development challenges and poverty eradication on that continent. Regarding climate change and its adverse effects, his country was fully committed to finding a common response in accordance with the United Nations Framework Convention on Climate Change. In order to fashion its own response to that global issue, Montenegro had established a regional forum in the country to deal with the challenges and prevention of climate change at national and regional levels.