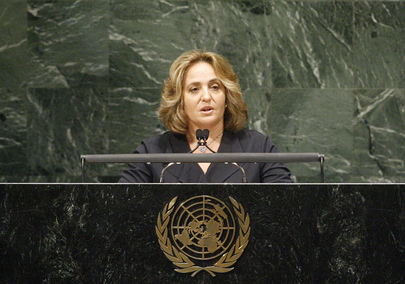 ISABELLE PICCO (Monaco), noting the international community’s determined recommitment towards broad achievement of the Millennium Development Goals during the Assembly’s summit-level meeting last week, said that the United Nations was at the very heart of global development and “our trump card” in international relations. The rule of law was not a succession of empty words, she continued, but universal, independent and impartial.

Monaco, as part of the 3G group of countries on global governance, was convinced that it was necessary to involve the work of the Secretary-General on that matter, and that the 3G Ministerial Declaration, adopted September this year, would contribute to the development of the agenda of the G-20 Summit in Seoul in November this year.

Turning to the issue of displaced persons and refugees, she stressed that it was urgent to address this humanitarian crisis and for strategies addressing their circumstances be incorporated into policy. Continuing, she thanked the Secretary-General for strengthening the role of women and for establishing UN Women. She also noted that the investment in women’s health contributed to overall development, and to that end, Monaco supported the global strategy for full empowerment of all women.