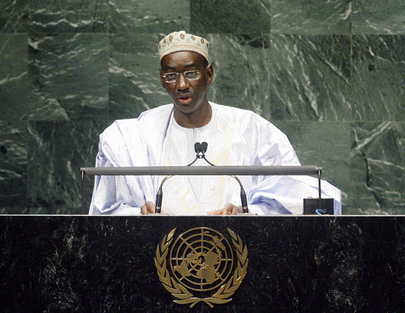 MOCTAR OUANE, Minister for Foreign Affairs and International Cooperation of Mali, said that, under the leadership of President Amadou Toumani Toure, his country continued to progress and develop for the well-being of its people. Every day it further built on the gains of its peaceful democracy, which was recognized worldwide as being exemplary, and further enhanced its presence in Africa and on the world stage. He called for reform of the global economic and financial architecture to prevent an even worse crisis from occurring. The United Nations must ensure a just and equitable representation of all regions, particularly in the Security Council. He reaffirmed Mali’s commitment to the Ezulwini Consensus and the Syrte Declaration adopted by African Union Heads of State, and he fully supported Africa’s demand for two permanent seats and five non-permanent seats on the Council. A reformed Council would better reflect today’s geopolitical realities and correct the historical injustices suffered by Africa, which was the only region in the world without a permanent Council seat.

Mali was resolutely committed to achieving the Millennium Development Goals in a sustainable manner through adoption of the 2006-2015 plan and implementation of the strategic poverty reduction framework and socio-economic development project, focused particularly on agriculture, food security, education and health, he said. Mali was encouraged by the results achieved in previous strategies, which had resulted in school enrolment increasing from 64 per cent in 2002 to 80 per cent in 2008. The infant mortality rate had fallen from 229 per 1,000 live births in 2001 to 191 per 1,000 live births in 2006, while the HIV/AIDS prevalence rate had fallen from 1.7 per cent to 1.3 per cent over the same period.

It was essential to speed up implementation of commitments made at key international conferences, particularly the Monterrey conference on financing for development, the Brussels conference on the least developed countries, the Barbados conference on small island developing States, and the Almaty conference on landlocked developing countries, he said. Climate change was a serious challenge. Today, more than ever, the planet’s survival was threatened by natural disasters that seriously affected living conditions in developing countries like Mali. Mali suffered from the encroachment of its deserts, silting of the Niger River, shortening of its winter season and poor rainfall distribution. That was why Mali would spare no effort to find a binding global agreement on climate change. In November, Mali would host a regional forum on sustainable development.

The HIV/AIDS pandemic continued to hamper development and seriously threaten humanity’s survival and security, he said. In keeping with the Abuja Declaration on HIV/AIDS, tuberculosis and other infection diseases, and the Brazzaville Declaration on universal access to treatment in Africa, Mali had launched a vast programme of multisectoral institutional and operational reform that obliged the public, private and civil society sectors to better coordinate efforts to combat the pandemic and be accountable to the nation. The international community must resolutely tackle trafficking of drugs, arms and human beings.

He went on to say that Mali had adopted a new strategy to combat the lack of security and terrorism. It sought to strengthen national capacities through robust action in security and community development, and to promote effective regional cooperation within the Sahel-Saharan region. Mali’s President had organized a conference on peace, security and development in that region. He welcomed national reconstruction, reconciliation and peacebuilding in Guinea-Bissau, Guinea, Côte d’Ivoire and the Democratic Republic of the Congo. He reaffirmed solidarity with the Palestinians for their own independent State and supported relevant United Nations resolutions.