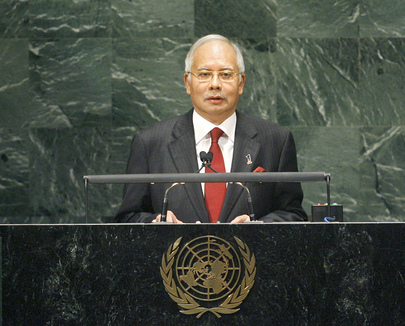 MOHD NAJIB ABDUL RAZAK, Prime Minister of Malaysia, said that a most important challenge confronting the international community was the need to collectively address the challenge of ensuring a just, equitable and durable peace for all time.  That peace must be premised on a covenant of the willing and not one enforced by way of hegemony through fear and coercion.  Constructive engagement through dialogue was the way to achieve such peace so as to create deeper understanding as well as appreciation for each other.

On another issue, he said the World Trade Organization remained relevant in today’s economic climate and the Doha Round must return to its original objective of ensuring free, fair and equitable trade.  Further, since the adoption of the Millennium Development Goals a decade ago, there had been a lack of effort on joint endeavours that would benefit humanity.  The missed opportunity at the climate change conference in Copenhagen last year should be a “wake up call” and the gaps in addressing climate change issues must be bridged, as it affected lives and livelihoods today and for future generations.  Turning to the Middle East, he said on 7 June 2010 the Malaysian Parliament had passed a resolution condemning the brutal Israeli attack on the humanitarian convoy headed for Gaza.  His Government also understood the necessity of letting the multilateral system work and had been pleased with the findings of the Fact Finding Mission of the Human Rights Council and felt vindicated by the findings.  It was now waiting for the United Nations Investigation Panel to complete its work.  Malaysia wanted to see the perpetrators brought to justice and adequate compensation given for the innocent victims.

On the Middle East peace process, he supported direct dialogue between the parties on achieving a two-State solution, which should address the following prerequisite issues:  first, Israel must heed the high expectations of the international community to end the conflict and the Quartet must persuade Israel to end the construction of new settlements; second, reconciliation efforts must bear fruit and political unity among the Palestinians was vital; and third, both parties must eschew violence and ensure the protection of civilians.

Continuing, he said it was of concern that there was an increasing trend in parts of the world to perpetuate and even fuel Islamophobia.  The real issue involved was not one between Muslims and non-Muslims, but between moderates and extremists of all religions.  A “Global Movement of the Moderates” from all faiths must be built to work together and marginalize the extremists who have held the world hostage with their bigotry and bias.  The moral high ground that has been usurped from the centre must be urgently regained so that moderation was chosen over extremism, negotiation over confrontation, and working together over working against each other.  “We must give this effort utmost priority for time is not on our side,” he said.  Recent efforts in the United States to stop a Koran burning and promote the building of a multi-faith community centre near the former World Trade Tower site were commendable and clear examples of what moderates could achieve when they stood up to extremists.