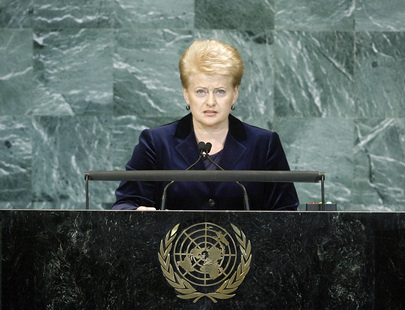 DALIA GRYBAUSKAITĖ, President of Lithuania, said recent years had been marked by many challenges and that all countries, large and small, should take actions to address the fallout from the financial and economic crisis and deal with the painful consequences of natural and man-made disasters. In a globalized world, all countries must share responsibility for the future, and the scale of deeds and openness of hearts would make the difference, not the size of territories.

In the fields of security and the environment, she said Lithuania had launched an initiative to draft a resolution on sea-dumping of chemical weapons for consideration by the General Assembly, and had also hoped to strengthen international efforts to raise awareness about the dangerous munitions buried at sea. Guidelines must be put in place outlining courses of action in case of disaster. She called on the United Nations to take a more active role in very concrete projects, “even if they may not seem big enough for the world”.

She went on to say that gender equality was another issue of vital importance, but which was rarely associated with overcoming the impacts of the economic crisis or helping communities cope with the effects of climate change. However, it had been estimated that ending gender discrimination in labour markets would increase GDP by as much as 30 per cent. In Lithuania, for instance, women held a number of top positions in political and business life, and it was only natural that women in the country had taken to heart the famous saying: “when the going gets tough, the tough get going”. Nevertheless, more and better coordinated efforts were needed, she said, stressing that universal gender equality would only be achieved when a certain level of security and economic development had been reached.

The international community needed to coordinate and scale up its efforts to eradicate intolerance and discrimination, which were so often at the heart of conflicts. That would pave the way for achievement of the Millennium Development Goals, she said. European Union initiatives such as the Lithuania-based European Institute for Gender Equality could serve as a model for other regions. She hoped that the framework for the Community of Democracies, in Vilnius next June, would explore many more relevant ideas and good practices.

Security, environment and gender equality were all interdependent, she continued, stressing the need for deeper and more concrete discussions on those issues at the global level. The European Union had been the most responsible worldwide donor for years. For its part, Lithuania, with its limited resources, had provided humanitarian aid to Haiti, Pakistan, Republic of Moldova, Ukraine, Russian Federation and other countries. It had also engaged in training national security forces and community-based education programmes in Afghanistan. Each time a concrete project was implemented, she stressed, the international community moved closer to achieving its agreed goals and objectives.