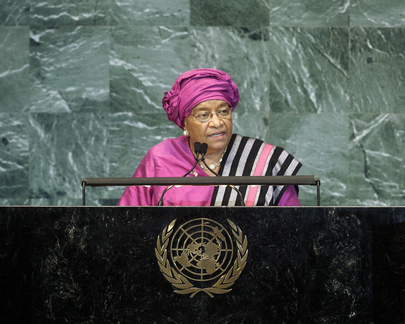 ELLEN JOHNSON-SIRLEAF, President of Liberia, said four years ago she told the Assembly about a country exhibiting the symptoms of two decades of self-destruction: a collapsed economy, suffocating external debt, dysfunctional institutions, destroyed infrastructure and a despaired people. Today, Liberia was well on its way to recovery. In less than five years, its economy was growing at an average annual rate of 6.5 per cent despite the 2009 global economic crisis.

She went on to say Liberia had successfully carried out the reforms required under the Heavily Indebted Poor Countries (HIPC) Debt Initiative and on 17 September at the Paris Club, Liberia’s $4.9 billion external debt was wiped off the books. Liberia had opened the economy to put the private sector at the centre of development and had attracted some $16 billion in private investment to reactivate the mining, agriculture and forestry sectors. There was new potential in recently started oil exploration.

The results of security sector reform, enhanced by the continued deployment of United Nations peacekeepers, had stabilized the country’s security situation, she said. That experience showed that peacekeeping and peacebuilding could and should take place concurrently. In promoting a liberal environment of freedom and equity as the best guarantee for peace, security and stability, Liberia had demonstrated commitment to good governance and respect for human rights. Regionally, Liberia continued to demonstrate commitment to good neighbourliness, peaceful coexistence and respect for the sovereign integrity of other nations. It actively participated in subregional and regional affairs through the African Union, Economic Community of West African States (ECOWAS), Community of Sahel-Saharan States and the Mano River Union.

As the world was a global village, continued crisis in any Member State warranted concern, she said. The situation in Somalia warranted a Chapter VII intervention. The world must act promptly to prevent Somalia from being a haven for anarchists and extremists. She supported the role of the African Union troops in Somalia. She called for more troop deployment from other countries and strongly supported action to “end the Somali quagmire”. She also called on the Somalis to accept dialogue and go to the negotiating table to reconcile their differences and restore their country to peace and dignity.

Liberia’s national development agenda and programmes on ensuring national reconciliation, good governance and the rule of law, national security, food security and poverty reduction were consistent with the Millennium Development Goals, she said. The country’s progress in that area bore the fruit of that commitment. Liberia’s efforts for women’s empowerment had been recognized on Sunday, 12 September, when it received an award on progress on the third millennium target. The target date for achieving the Goals did not matter; what mattered was the commitment to achieving them. She called on everyone present to support replenishment of resources of the World Bank and African Development Bank.

Liberia still faced challenges, she said. The security situation was fragile and the subregion faced political uncertainties. Liberia had aimed to address longstanding corruption by introducing new procurement and financial management systems. Judicial system reform was under way. To address Liberia’s vulnerability to organized cross-border crimes, her Government recently signed the Freetown Commitment on Combating Illicit Trafficking of Drugs and Transnational Organized Crime in West Africa. She said that 2011 would mark a groundbreaking turning point; Liberia would transition to full constitutional rule and participatory democracy. Everything must be done to ensure a peaceful, legitimate and transparent process. Her Government was fully committed to that objective.