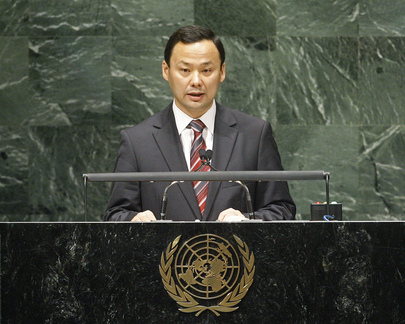 RUSLAN KAZAKBAEV, Minister for Foreign Affairs of Kyrgyzstan, said 2010 marked a year of profound change and serious challenge for his country. In April, his people, having overthrown a corrupt Government, had chosen the way towards democratic renewal. Destabilization in the South, when extremist groups sought revenge, had provoked bloody clashes between Kyrgyz and Uzbeks. Those third forces had “played an ethnic card” by exploiting the precarious confluence of poverty, high unemployment and unequal access to economic and financial resources that had been ignored by the former Government. The new Government had stabilized the situation with international help, and on 27 June, a new Constitution was adopted at the national referendum level. Today, he could declare that all political, economic and organizational conditions had been met for the conduct of elections on 10 October. AState based on rule of law and human rights could be established.

Vowing to analyse the causes of the recent conflict, he said a State Commission had been formed and an investigation launched by Kyrgyz, Uzbek and other analysts. In addition, an International Independent Commission, comprised of European Union, Organization for Security and Cooperation in Europe (OSCE) and United Nations representatives, had begun its work. Those responsible for the clashes must be named and ways must be found to seek inter-ethnic consent in society. A commitment to national unity would remain the priority. To that end, the Government had sought various forms of cooperation to stabilize the situation. He appreciated the work done by the OSCE consultative group in that regard. Also, he was grateful for the pledges made to the United Nations emergency humanitarian appeal and the support provided on a bilateral basis. His country had received 40 per cent of commitments made in the appeal and, for its part, was focusing on post-conflict reconstruction in the South. Timely implementation of pledges announced in July was extremely important, he added.

He agreed on the need to enhance the United Nations role in humanitarian situations and welcomed the creation of an anti-terror strategy for the Central Asian region. Terrorists attempting to reach Kyrgyzstan by mountain were a testament to the threat posed to States that bordered Afghanistan. Drug lords, among others, were a concern and those elements should be eliminated. With that in mind, a State drug-control agency, liquidated a year ago, had recently been restored. He urged strengthening the activities of the Central Asian Regional Information and Coordination Centre, under the aegis of the United Nations Office on Drugs and Crime (UNODC), saying that the action plan developed by the European Union and Central Asian countries was key to fighting illegal drug trafficking.

Indeed, peacekeeping and reconciliation in Afghanistan was a special concern, he observed, with elections suggesting optimism for strengthening civil society. Support for Afghan institutions would help reduce threats in the Central Asian region. Kyrgyzstan backed international reconstruction projects in that country and would contribute to anti-terrorist efforts. Turning to nuclear non-proliferation and disarmament, he said Kyrgyzstan had been designated as a repository for a regional nuclear-weapon-free zone and he requested support for its establishment. As for peacekeeping, Kyrgyzstan was the only regional country that had contributed some 30 keepers to Africa and the Caribbean and it stood ready to increase that presence. His country also wished to participate in the Security Council and its committees. The United Nations must answer people’s expectations and he reminded the Assembly about that duty.