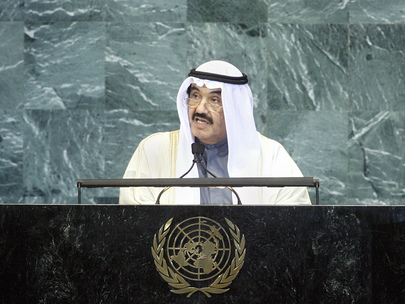 NASSER AL-MOHAMMAD AL-AHMAD AL-SABAH, Prime Minister of Kuwait, said the United Nations was the world’s best multilateral international mechanism and the most legitimate, neutral and credible institution. Over six decades, it had demonstrated the ability to ward off destructive wars and maintain global peace and security. However, the international community faced increasing challenges and was becoming more entangled and complex. Organizations had branched out to confront social crises, economic problems and security challenges which had wiped out many of the gains numerous developing countries achieved towards reaching the Millennium Goals. Natural disasters had also harmed many of the same countries and plenty of work remained to limit the dangers of climate change.

To meet the world’s challenges, the United Nations needed reforms to keep pace with changes in international relations and advance their performance, and Kuwait welcomed the establishment of UN Women to foster international efforts to accelerate gender equality. He added that after 17 years of negotiations to reform the Security Council, it was time to make that body’s work more transparent, increase its members to achieve fair representation and guarantee the right of Arab and Muslim States’ representation corresponding with their size and contributions.

With its firm belief in the United Nations vital role easing human suffering, Kuwait has decided to increase voluntary contribution to a number of United Nations programmes fivefold. Kuwait has also approved its own 2010-2014 development plan, allocating nearly $115 billion to develop infrastructure and continue to improve basic services. Continuing, he said that 20 years since it had been invaded by Iraq, Kuwait was optimistic about future relations between the two countries and was ready to assist the Iraqi Government and, in that regard, hoped negotiations between its political parties would lead to the formation of a national unity Government representing a democratic, peaceful Iraq.

Kuwait, in its capacity as Chair of the current session of the Gulf Cooperation Council, the United Arab Emirates and Iran also continue to work to find a resolution for the conflict over the occupied Em irati Islands. He added that States had the right to use nuclear energy for peaceful purposes but called upon all States to cooperate with the International Atomic Energy Agency (IAEA) and take steps to reassure the legitimacy of their programmes, which would make the Middle East a nuclear-weapon-free zone. The Arab-Israeli conflict was considered one of the gravest threats to the region; the international community and Security Council were responsible to deal “seriously and sternly” with Israel.