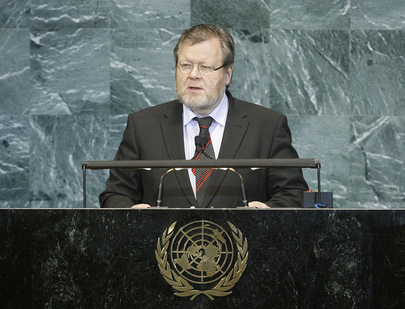 ÖSSUR SKARPHÉÐINSSON, Minister for Foreign Affairs and External Trade of Iceland, said his country had been ravaged by the financial crisis last year. Economic emergency laws had been passed, and fiscal cuts and radical financial reforms had been undertaken. All efforts, including those undertaken in close cooperation with the International Monetary Fund (IMF), had helped to place Iceland on the road to recovery. The financial crisis his country faced had brought to light the importance of democracy and human rights, spurring a change in the Constitution to increase the people’s power. He proudly noted that Iceland had legally ensured full equality for same-sex partnerships, urging other countries to remove all discrimination based on sexual orientation.

Turning to gender equality, he said Iceland was celebrating 95 years since women had gained the right to vote and 30 years since a woman had first been elected as President. Iceland was saddened by the decision of the Iranian courts to stone to death an Iranian woman, Sakineh Mohammadi Ashtiani, and he appealed to President Mahmoud Ahmadinejad to spare her life. With regard to climate change, he said its looming impacts put human rights at stake. Highlighting some examples of that, he called for more drastic action than what had been agreed upon in Copenhagen. For its part, Iceland had made many contributions to combat climate change. It had recently engaged in discussions with some big nations operating, for example, in East Africa, to form a partnership for a geothermal drive in countries with unused potential.

Lastly, he noted that human rights could not be addressed without discussing the plight of the Palestinians and the people of Gaza. Iceland strongly condemned the raid on the flotilla bringing humanitarian aid to the Gaza Strip, and sympathized with the Palestinians held in occupation by an “oppressing Power”. He urged Israel not to prevent humanitarian assistance from reaching the needy in Gaza. He had heard “hidden hope” in United States President Obama’s speech to the Assembly yesterday, and he called on the international community to use every possible, sensible way to demonstrate solidarity with the Palestinian people.