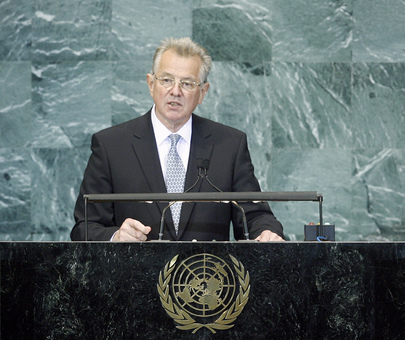 PÁL SCHMITT, President of Hungary, confirmed that, as a candidate country to the Security Council for 2012-2013, his Government would do its utmost in contributing to the international community’s crisis management and peacekeeping operations, as well as to international development and humanitarian activities. Naming climate change among the paramount challenges of the twenty-first century threatening security and economic development, he said that the international community should pay particular attention to the concerns of the small island States of the Caribbean and the Pacific and that a series of action-oriented decisions should be adopted at the upcoming negotiation sessions of the United Nations Framework Convention on Climate Change in Cancun, Mexico. He added that Hungary was committed to reducing European Union greenhouse gas emissions by 20 per cent until 2020 and further reductions if partners made similar commitments.

Hungary was at the forefront of international efforts to fight all forms of discrimination, including discrimination based on national or ethnic origin, and it had decided to establish the Budapest-based Tom Lantos Institute, an international centre for promoting human rights and tolerance, he said, noting that Hungary also felt compelled to raise the issue of women worldwide. Regarding nuclear disarmament, Hungary also was concerned that the growing consensus around an ultimate goal of so-called “Global Zero” in nuclear weapons was offset by overt and covert attempts at weapons of mass destruction and missile proliferation by certain countries.

He went on to say that Hungary fully supported the statement made in New York on 22 September by the High Representative of the European Union on the negotiations conducted between the “E3+3” Powers (China, France, Germany, Russian Federation, United Kingdom and United States) and Iran. Condemning international terrorism in all forms and referring to the 11 September attacks, he said, “The appalling statement made by one of the speakers yesterday concerning this tragic event is unacceptable and is detrimental to the noble cause of promoting mutual understanding and dialogue between religions and civilizations.”

Progress towards the stabilization of the Western Balkans and the resolution of its still existing problems should be an internally driven process, supported by the international community, and Hungary respected the recently issued advisory opinion of the International Court of Justice on Kosovo, he said. Hungary also expressed its commitment to supporting Afghanistan through bilateral and multilateral channels.

Additionally, Hungary envisaged the establishment of an independent, democratic and viable Palestinian state, living side by side in peace and security with Israel and its other neighbours, and welcomed direct talks between the Government of Israel and the Palestinian Authority. Stating that Hungary was also a partner to African countries in enhancing development and establishing peace and security, he encouraged Africa’s voice be heard in relation to compelling global questions, such as water management, poverty eradication and the empowerment of women.