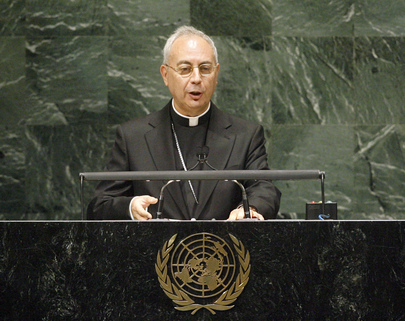 DOMINIQUE MAMBERTI, Secretary for Relations with States of the Holy See, said that despite its imperfections, the United Nations sought to find solutions to economic, social and humanitarian problems, with a view to maintaining peace among the world’s peoples. The General Assembly was a fundamental instrument for achieving such goals, showing that the United Nations was irreplaceable in the search for a better future. From that perspective, he recalled various peace and security developments over the last year, welcoming the 1 August entry into force of the Cluster Munitions Treaty, which his delegation had been among the first to ratify, as well as the conclusion of the eighth Non-Proliferation Treaty Review. Another sign of hope had been the decision to hold a conference on achieving a Middle East free of nuclear and other weapons of mass destruction. The first session of the preparatory committee for a conference on an Arms Trade Treaty demonstrated that the Treaty process was shared by all States, aware of need to legally control the arms trade for reasons of peace, humanitarian protection and development.

Welcoming the signing of a new Treaty on the Reduction and Limitation of Strategic Offensive Arms between the United States and Russian Federation, he said the recent high-level meeting on disarmament had given new life to both the Conference on Disarmament and building of consensus on disarmament challenges, including the Comprehensive Nuclear-Test-Ban Treaty and Fissile Material Cut-off Treaty. He supported all efforts along those lines. In other areas, he said the Peacebuilding Commission, which was fundamental to the rebuilding of economic and social fabric destroyed by war, deserved support. There was cause for concern on various issues, he said, noting that military spending continued to increase, while the problem of exercising the legitimate right to peacefully develop nuclear power remained relevant.

In the Middle East, he said, better living conditions for Palestinians would help transform violent opposition into calm, patient dialogue. Turning to the Millennium Development Goals, he welcomed the repeated determination to eradicate poverty, underscoring the moral imperatives that had to be fulfilled in that regard. Rich countries must carry out pledges for development aid and ensure the global trade system functioned, while both rich and poor nations must take measures to eradicate corruption.

Respect for human rights was the final objective of international affairs, he said, and the basis for productive dialogue among States. He supported the Office of the United Nations High Commissioner for Refugees and all specialized agencies working in that field. On the responsibility to protect, he said there was a lack of attention to refugees, expelled persons and migrants. History also showed that respect for religious freedom was the cornerstone of respect for all human rights. In sum, the United Nations was an essential forum for dialogue and understanding among Governments.