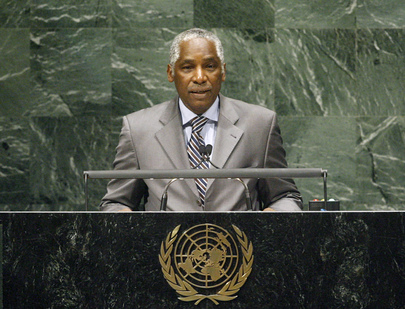 BAKARY FOFANA, Minister for Foreign Affairs of Guinea, said the new Government was facing numerous difficulties, particularly bad governance, widespread insecurity, widespread weapons proliferation and other critical issues. The Government was now trying to establish order, along a path of dialogue. The process of democratization had led to a transitional phase under a timetable to be fulfilled. The new constitution had already triggered massive voter turnout. He appealed to the African community to continue to support his country, as a way to support peace and stability in the region.

Regionally, there were challenges already, including the situation in Somalia and in Sudan, Côte d'Ivoire’s coming election, and the United Nations efforts in western Sahara. The recurrence of threats and terrorist violence was a grave concern to Guinea. Turning to the Middle East, he hoped that peace could be achieved in a climate of mutual confidence, following relevant General Assembly and Security Council resolutions and Israel’s changing of its settlement policies.

The Millennium Development Goals were within reach, he said. With five years to the 2015 deadline, efforts should be sped up. Guinea welcomed recent increased levels of official development assistance; however, commitments had not yet been fulfilled. Development assistance should rise to meet needs, and a conference establishing Millennium Goal resource needs could help to provide the funds needed. The African Declaration commitment to transparency would benefit the entire continent.

The Doha Round should be concluded to benefit developing countries and particularly least developed countries, he said. Export subsidies should be eliminated, as they had a negative impact on agricultural sectors in developing countries. Climate change was also high on the international agenda. A collective awareness was emerging, and Guinea urged concerted international action to alleviate suffering resulting from climate consequences. Technical cooperation and other efforts could improve the situation. Guinea was committed to moving ahead on sustainable development policies and strategies, having over twenty rivers coursing through and near his country. The new culture of international solidarity was essential in making governance more transparent. With United Nations reforms, the world could move towards a future of liberty and prosperity, free of fear, misery and need.