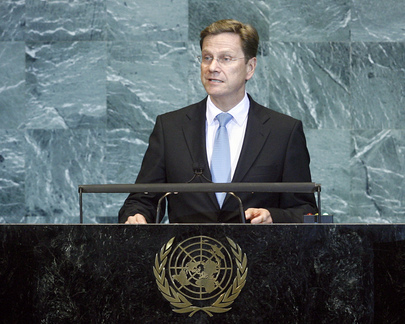 GUIDO WESTERWELLE, Vice-Chancellor and Minister for Foreign Affairs of Germany, in a broad ranging statement declared that the world had changed dramatically since the founding of the United Nations some 65 years ago and only if its Members were able to act, would they shape those global changes.  Indeed, the international community would only manage to solve security, economic, social and ecological development problems if it stood united.  Germany was ready to assume such global responsibility within the framework set by the United Nations.

Saying German foreign policy was firmly embedded in the international community, he observed that in Europe, a system of cooperation had replaced the confrontation that had cruelly divided that continent for centuries.  The European Union was successful because, in Europe, all peoples and States met on an equal footing.  The United Nations, too, brought together nations both large and small, rich and poor, those that were more powerful and those with less influence.  Cooperation on an equal footing between equals was thus the guiding principle also for the Organization’s work.  Emphasizing that his country’s foreign policy was “peace policy”, he said this autumn Germany would stand for election as a non-permanent member of the Security Council, because that was an ideal forum in which to cooperate in the causes of peace and development.

He noted that climate change had a direct impact on all nations.  Countless people were already personally feeling its economic and social consequences.  Therefore, with that in mind, everyone needed to play their part to protect the climate, he said.  Germany had recently adopted a forward-looking energy strategy whereby 80 per cent of its electricity production would come from renewable sources by 2050.  The country had also pledged to reduce CO2 emissions by 40 per cent by 2020 compared to the 1990 baseline.  At the same time, Germany was helping those who were now worst affected by climate change, with particular concern for the fate of small island States.

He said anyone who was serious about combating climate change had to build on innovation, new technologies and exchange.  Both developed and developing nations could profit from cooperation on future energies, and Germany would contribute its technological expertise in the fields of renewable energies and energy efficiency.  It was his view that education was the key to development, asserting that the true wealth of many nations was no longer found in their raw materials, but in the minds of their people, and that education was a human right.  Continuing, he was of the view that the United Nations itself had to keep up with the pace of change, declaring that the world order of today was not properly reflected if Africa and Latin America were not permanently represented on the Security Council.  Asia, too, rightly considered itself underrepresented.  Germany, too, remained ready to assume greater responsibility.

Turning his attention specifically to the issues of disarmament and nuclear non-proliferation, he believed that those were not issues of the past, but challenges of our time.  “Disarmament and nuclear non-proliferation are two sides of the same coin.  We have to do all we possibly can to ensure that weapons of mass destruction do not become the bane of globalization,” he declared, explaining that, unlike the Conference five years ago, this May’s Review Conference of the Non-Proliferation Treaty (NPT) had been a success.

If Member States worked together to maintain that momentum, it would be in their power to ensure that this decade did not see a build-up of arms but became a decade of disarmament.  A world without nuclear weapons was a long-term vision, but even a marathon began with the first step, he said.  Noting that for over 10 years the Geneva Conference on Disarmament wasn’t even able to agree on an agenda, he observed that there was now movement in the disarmament debate.  The group of States founded in New York on Wednesday to advance disarmament and arms control did not stand alone, and the world would be a more secure place when the Comprehensive Nuclear-Test-Ban Treaty (CTBT) entered into force and the production of fissile material ended.

On Afghanistan, he said Germany was one of the major supporters of a peaceful and secure Afghanistan.  To make progress in a country long ravaged by war and civil strife, effective measures needed to be taken to prevent the violence.  However, military means alone would not bring success.  He urged all sides to have the courage and stamina to engage in reconciliation now, and expressed similar sentiments on the conflicts in Sudan, Yemen, Somalia and elsewhere in the world, where, he said, Germany was working hard to bring peace.  Reconstruction efforts in devastated regions could not bring success overnight.  Equally, for societies torn by war and civil strife, the route to life in dignity was through peace and reconciliation, he added.