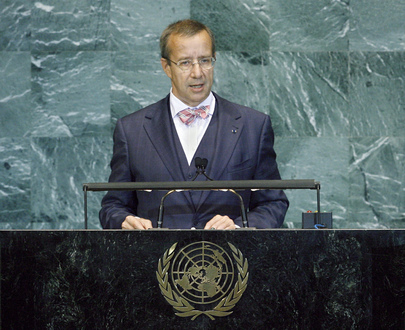 TOOMAS HENDRIK ILVES, President of Estonia, focused on three pressing global matters: progress towards the Millennium Development Goals; promoting peace and security; and humanitarian affairs. Over the past decade, the Goals had triggered a level of commitment and wide-ranging partnership never before seen. There had been setbacks, but achieving the Goals was nevertheless an attainable reality with concrete targets and deadlines. The targets could only be reached if everyone shared responsibility and pushed in the same direction.

Moreover, he said the political will expressed by most stakeholders at the recent Summit and its outcome document needed to be implemented promptly. Estonia was ready to provide continuous contributions towards achievement of the Goals through focused development cooperation with its partner countries. He went on to say that the development of information and communications technology had been a crucial engine of economic development and modernization for Estonia over the past 20 years. Its experts advised Governments on infotech solutions in many parts of the world and, in cooperation with the United Nations Development Programme (UNDP) and the Open Society Institute, it had established an academy to assist developing-country Governments in its use.

The more the digital gap was reduced, the more accelerated and more sustainable overall economic progress would be. He also commended United Nations efforts towards more efficient operations, especially the long-awaited system-wide coherence negotiations. The establishment of UN Women would be an extra boost for meeting the Goals, and Estonia pledged support to the new agency. On other issues, he said that with 15 military and 12 political operations, the United Nations peacekeeping force was clearly stretched thin. Further reforms were needed to help advance effectiveness of peacekeeping operations and encourage regional actors to assume a stronger role.

For the past 10 years, Estonia had contributed to the peacekeeping budget at a voluntarily enhanced rate, and it would continue to do so. All Member States equally shared responsibility to apply principles enshrined in the Charter, he said, including refraining from any threat or use of force against any State. Estonia reiterated its firm support for the sovereignty, territorial integrity and stability of Georgia, based on adherence to international law. It was necessary to continue with the Geneva talks in their initial format for peace resolution of the conflict and humanitarian issues, particularly return of refugees and wider access to the conflict zone needed to be seriously addressed now.

Estonia was finalizing a national action plan to enhance protection of women and girls, and was a strong and principled advocate of human rights. It supported the strengthening of the Human Rights Council, which it aspired to join in 2010. Estonia had continuously increased its contribution to United Nations humanitarian activities, but saw that more combined efforts were needed securing the link between relief efforts and development work. He said increasingly frequent violations of humanitarian principles in conflict zones also concerned Estonia, and increased efforts for security of humanitarian aid workers was needed. As a European Union member, Estonia also believed the Lisbon Treaty enhanced the Union’s ability to secure peace, stability and prosperity for all. With that shared commitment, he expected the vital role of the United Nations to be further reinforced.