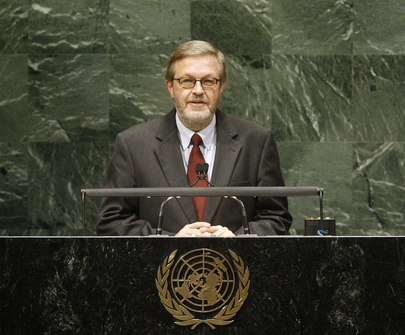 CARSTEN STAUR (Denmark) said an effective multilateral system founded on universal rules, values and global legitimacy was needed in order to respond to current challenges. One of the most significant global challenges was achieving the Millennium Goals by 2015. To make the Goals a reality for all, progress must be accelerated and efforts must be scaled up. Developing countries must focus their political will, administrative capacity and budgetary resources on reaching the Goals, while donor countries must live up to their ODA commitments. Green growth, he noted, was an important challenge which offered new opportunities for employment, innovation and wealth creation worldwide. The international community must strive to optimize resource efficiency and apply green technologies, including renewable energy.

Moreover, climate change continued to be one of the greatest challenges of the time, and the world was experiencing its consequences. The Copenhagen Accord paved the way for eventually reaching a global, legally binding agreement within the United Nations framework, he said, underlining the importance of fulfilling commitments on fast-start financing. Turning to the principles, values and universal rights enshrined in the Charter, he stressed that it was a priority to uphold them. He pointed to recent threats to burn the Koran in Florida, which his country strongly condemned. States must ensure the human rights and fundamental freedoms of their citizens, including women’s rights and gender issues which were an essential part of human rights. International peace and security rested on States’ ability and willingness to ensure the protection of its population from human rights violations and atrocious crimes.

Highlighting challenges on regional, national and global levels, he noted that while Denmark strongly supported the International Criminal Court, it did not believe the Court should prosecute all international crimes. National jurisdictions were almost always better placed to combat impunity. He considered the proliferation of weapons of mass destruction to be the “most serious danger of globalization”, urging all States to commit to implementing the measures of the Non-Proliferation Treaty action plan. Touching on threats to peace and security, and efforts to address them in Afghanistan, Pakistan, Sudan and Somalia, he pointed to the United Nations. “The best way to deal with these global challenges is through an effective and strong multilateral system — through the United Nations system,” he said, calling for improvements in the Organization as well as reform.