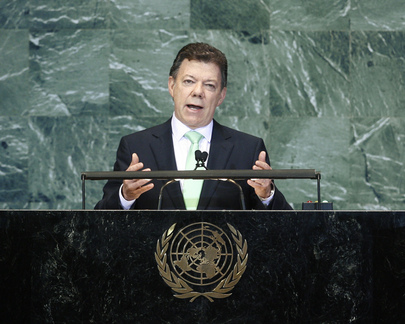 JUAN MANUEL SANTOS CALDERÓN, President of Colombia, informing the General Assembly that this was his first time speaking before the world body, affirmed the commitment of more than 45 million Colombians to support the success of the United Nations and its founding principles. In that spirit, he also stated Colombia’s aspiration to become a member of the Security Council for the period 2011 to 2012. In the 200 years of independence, his country’s response to crisis such as terrorism and “the ravages of international crime” had always been through the rigours of democratic procedures. It was because of that heritage and experience that Colombia would bring the voice of Latin America and the Caribbean to such a position on the Council.

He then turned to his country’s participation as advocate of and a participant in peacekeeping and peacebuilding operations, including the United Nations Stabilization Mission in Haiti (MINUSTAH), the United Nations Integrated Peacebuilding Office in Sierra Leone (UNOSIL) and the Multinational Force and Observers in Sinai. Continuing, he stated that that Latin America, which had nearly 600 million people with diverse positions on multiple political views, was united by the determination to overcome poverty and enter into the global market, among others.

Because of its efforts to assume the management of its economics, Latin America had been the region least affected by the global economic crisis. A sub-continent filled with “talent and ability to work”, he noted its growing leadership in the global arena and, with the immense challenges facing the world, he stressed that: “ Latin America can and wants to be part of the solution!”

He reminded the Assembly that his country had the highest biodiversity per square kilometre and was not a country with high polluting emissions. Yet, regardless of that, Colombia, in assuming responsibility in the area of environmental conservation, wished to become a model country in the world, monitoring forests, carbon emissions and the state of biodiversity. To this end, he called for a replacement for the Kyoto Protocol, the first commitment phase of which expires in 2012.

In regards to the Millennium Development Goals, he chose not to repeat his country’s own progress and efforts. Rather, he turned to his recent visit to Haiti, where it had been clear that the pledged international aid had not fully materialized, nor was the impact of what had been deployed visible. He called for MINUSTAH to be transitioned into a development operation that would achieve concrete results.

He concluded by referring to two entwined “global scourges” of terrorism and drug trafficking; where the former was often financed by the money produced by the latter. Colombia had been impacted more than any other country by these, yet had been a “model in the fight against them”. Colombia had been the first country to apply reparations in the demobilization of illegal armed groups, among others, and he called for the international community, in the spirit of shared responsibility, to act together. “In the fight against drug trafficking, we have lost many of our best soldiers and policemen, many of our best leaders, our best judges and our best journalists,” he said. Yet these sacrifices were not in vain, the defeat of the major drug cartels being proof.

However, concerned for his neighbours’ increased drug activity that might have resulted from Columbia’s success, he called for the world to “open its eyes” to this serious issue as not doing so might be “fatal”. Noting the contradictions of some Member States demanding a strong fight against some drugs while simultaneously considering legalizing the consumption of others, he urged that a review of the global strategy against illicit drugs take place and that all countries contribute equally to this end.