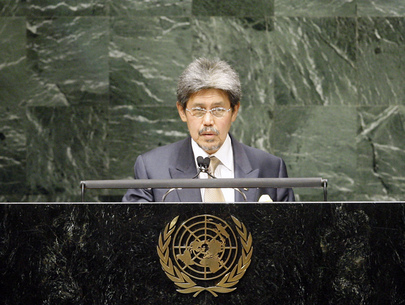 MOHAMED BOLKIAH, Minister of Foreign Affairs and Trade of Brunei Darussalam, discussed what his country viewed as the most important aspect of the United Nations work: that of its agencies, their experts and, above all, their volunteers in the field. This year’s debate underscored the importance of their work and asked States to recognize the Organization’s central role in global governance. “I have no difficulty in doing this,” he said. While achieving security and development was, of course, each State’s responsibility, many global challenges were simply beyond any one nation or region. They were international in the full sense of the word and required help and expertise, exactly what United Nations agencies offered.

In Brunei Darussalam, such support was taking place through the UNDP, United Nations Environment Programme (UNEP) and United Nations Children’s Fund (UNICEF), for which he expressed gratitude. Those agencies met people directly, listened and discussed. They taught, trained and encouraged. They worked closely with local authorities, which Brunei Darussalam had seen first hand during last year’s H1N1 health crisis. For a small nation like Brunei Darussalam, such problems could have “closed us down,” but they did not. His people had understood they were not alone and World Health Organization (WHO) guidelines provided confidence in an extremely worrying time. With that, he reaffirmed his nation’s respect for United Nations agencies. Without them, the concept of global governance would be at best just an idea.