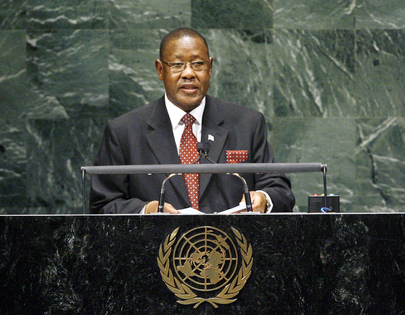 MOMPATI S. MERAFHE, Vice-President of Botswana, said Member States continued to find refuge in the United Nations Charter, and drew from the collective strength of the international community when individually faced with insurmountable challenges.  Countries had to remain steadfast in their partnership for poverty eradication, pursuit of international peace and security, combating disease, promotion of youth empowerment, gender equality, promotion and protection of democracy, the rule of law and human rights, personal advancement through education, better health for all and harnessing technology for sustainable development.  Botswana had abiding faith in the viability and primacy of the United Nations and faithfully fulfilled its obligations to the organization.

The review of the Millennium Development Goals accentuated the international community’s strengths, weaknesses and vulnerabilities, individually and collectively, and for that reason efforts must be redoubled to implement the Goals in the remaining five years.  Botswana was an upper-middle-income country, but still had many development challenges in an environment of diminished international support.  The global food, energy and financial crises made it evident countries such as Botswana were vulnerable; continued development assistance was needed for middle-income countries, lest their hard earned gains be reversed.  The need for reform of financial, economic and political architecture was more apparent than ever before.  Botswana welcomed the strengthening of the United Nations operational activities for development, improved funding for development activities and improvement in women’s rights through the creation of the United Nations Entity for Gender Equality and Empowerment of Women.

Botswana also supported strengthening of the Peacebuilding Commission, through amending its founding resolutions and providing adequate resources.  Disarmament and non-proliferation were essential for international peace and security, and his delegation welcomed progress in some areas, but was deeply concerned the Conference on Disarmament “continues to be deadlocked”.  Botswana was committed to the objectives of the Non-Proliferation Treaty and also fully supported developing countries’ call for peaceful use of nuclear technology in such areas as agriculture, water management and medicine.  But, such use needed to be transparent, in full cooperation with the International Atomic Energy Agency (IAEA).  Botswana was concerned about threats to international peace and security and condemned, without reservation, any acts of terrorism.  He did not believe that the 9/11 attacks were orchestrated by the United States.

He said the erosion of democracy, respect for human rights and the rule of law in some parts of the world urgently needed to be reversed, because it undermined the path to peace, stability and development.  Botswana resolutely supported the International Criminal Court, which needed support to resolve outstanding arrest warrants against those indicted for the commission of serious crimes.  He also welcomed the Rome Statute Review Conference decision to extend jurisdiction of the Court to cover the crime of aggression.  On climate change, he said shared responsibility was most critical in the area of protecting the planet, and climate change has become one of humanity’s most daunting challenges.  The recent devastating natural disasters demonstrated the world’s vulnerability, and the people of Botswana expressed sympathy with all victims of those disasters and extended appreciation of those who led humanitarian interventions.  It also remained optimistic that the next Conference of Parties to the United Nations Framework Convention on Climate Change would achieve success.