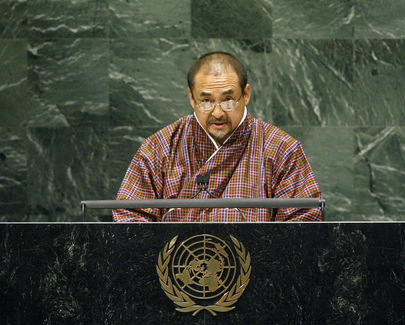 DASHO DAW PENJO, Foreign Secretary of Bhutan, noted that the vast majority of Members of the United Nations were small States. The principal of sovereign equality enshrined in the United Nations Charter, he recalled, established that all States, regardless of size, were accorded equal opportunity to participate in the Organization’s work. “How can we as Members of the United Nations credibly espouse equity among nations and peoples if we fail to practise it among ourselves?” he asked. In this context, Bhutan sought membership for a non-permanent seat in the Security Council for the term 2013-14.

On 20 September, he noted, the country’s Prime Minister stressed the need to move beyond conventional development practices, proposing the inclusion of “Happiness” as the ninth Millennium Development Goal. The delegation was hopeful that the proposal would receive broad support. He welcomed the unanimous adoption of the resolution on System-wide Coherence by the General Assembly in July and commended the establishment of UN Women to address the global issues of gender equality and women’s empowerment. He also noted that, as a result of that resolution, the funding system would be more systematic and overall governance would be harmonized, improving the capacity of the United Nations to more effectively deliver assistance.

Further, Bhutan’s delegation supported the expansion of both the permanent and non-permanent membership of the Security Council and believed that India, Japan, Germany, Brazil and two more countries from the African continent had to be granted permanent membership in the Council. As pertained to climate change, he stressed that success would be essential in Cancun for small and vulnerable countries such as Bhutan. In this vein, he proclaimed, “We must have the necessary resources for mitigation and adaptation measures.”