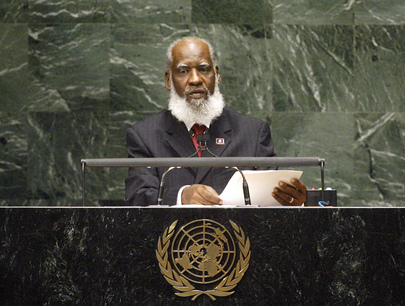 WILFRED P. ELRINGTON, Minister for Foreign Affairs and Foreign Trade of Belize, congratulated the Assembly President on his election, but said that, despite the common values of peace and democracy shared by their two countries, the dramatic differences - most notably, Switzerland’s $400 billion economy compared to his coastal country’s $1 billion economy - illustrated the stark differences that epitomize today’s world. “We, in this hall, tout sovereign equality, but we experience social and economic disparity on a daily basis, across the globe,” he said. Inequality continued to exist between nations - and within nations. In the last 10 years, real output per capita in his country had grown, but so did the proportions of Belizeans living in poverty. He acknowledged that development was a matter of national responsibility, but that contemporary reality rendered questions that were hitherto matters of national concern, matters of global concern, and diminished the capacity of State management.

As a result, he continued, Belize’s macroeconomic policy and fiscal capacity could barely address the multiple exogenous shocks occasioned by the ongoing financial, food and fuel crises. Adequate international support was critical for Belize to avoid drifting away from attaining its goals, and he called on developed nations to make good on their promise to delver 0.7 per cent of their gross domestic product (GDP) for official development assistance (ODA) in order to further integrate Belize into the global economy. In the last 15 years, he said his country’s ratio of public debt to GDP grew steadily from 27 per cent in 1995 to 70.3 per cent in 2008, with a peak of 80 per cent in 2005. That debt-lead strategy, which had been the model of many other countries, had become a “burden for our children”, as the debt service obligations constrained the Government’s capacity to increase social investments. Belize was “off track” in meeting its Millennium Development Goals in the areas of poverty, hunger, education and equality for women. Therefore, international cooperation and support must complement, not dictate, the way forward.

While Belize’s traditional donors have long provided assistance, the country was benefiting from new modalities of cooperation, which was yielding direct and immediate returns for its people, he said. Belize had benefited from cooperation with various partners, including Taiwan, whose Government helped Belize develop its capacity in agricultural research, aquaculture, education and social sector investment. Cooperation with the Latin American and Caribbean region was also based on that approach. Belize had benefited from partnerships with Cuba, Brazil and Venezuela, and had recently received two years worth of emergency relief funds from the United Arab Emirates. “We need now to make these partnerships the standard for global cooperation,” he said.

At the United Nations, the global community had long focused on official development assistance as being synonymous with partnership, he said. That “myopic” view needed to be broadened. He called for a reform that would reflect a new orientation from a donor-recipient culture to one of true partnership with mutual respect, as well as a more equitable North-South representation that ensured coherence and was inclusive. For its part, he said that Belize was crafting a twenty-first century vision for a modern, green and sustainable economy predicated on capacity-building, human dignity, human development and innovation. The Government was working towards building domestic capital through social investments, job creation, improved access to credit and combating crime and violence, and recently launched Restore Belize, a programme that encompassed a comprehensive anti-crime initiative that would provide skills training, continuing education for adults, infrastructure development and fostering civic pride. In addition, it introduced new feeding programmes, subsidies for secondary school students and seed programmes for farmers. Its new Horizon 2030 project would help redefine its national objectives, and a Council of Science Advisers would integrate science and technology into the programme. Belize’s efforts were aimed towards ensuring development with dignity, he said, “and for this we seek partnerships, not charity”.