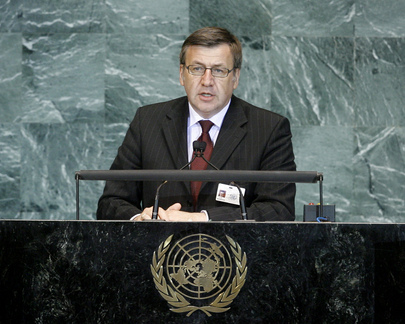 STEVEN VANACKERE, Deputy Prime Minister and Minister for Foreign Affairs and Institutional Reform of Belgium, said that at the heart of any form of governance lay responsibility, whether global or local, national or international.  However, responsibility alone was not enough as governance was not only about behaving responsibly, it was also about being accountable.  That applied not only at the level of the single State, but also at the level of the United Nations.  Human rights, security and development were at the core of the Organization’s mandate.

He pointed out that accountability in international affairs was about respecting international law, the rules that governed relations among States.  Without a solid legal basis, international cooperation remained optional and fell short of the necessary transparency and long-term sustainability.  To that end, taking up responsibilities in the area of human rights implied ensuring efficient means and mechanisms to ensure their protection.  Regrettably, however, attention today was all too often focused on how to react to human rights violations instead of focusing more on prevention and on the root causes of those violations.

Continuing, he observed that in the field of security, another pillar of the United Nations, there was a need for increased accountability, although he acknowledged important progress had been made in that regard over the last year.  Noting that respect for Non-Proliferation Treaty provisions and cooperation with IAEA was accountability in practice, he said Belgium particularly welcomed the entry into force earlier this year of the Convention on Cluster Munitions.  Unfortunately, the non-acceptance or non-respect for those provisions by countries such as the Democratic People’s Republic of Korea and Iran threatened the international non-proliferation regime.

On the Millennium Development Goals and the climate negotiations, he said those were at the top of the development agenda for the twenty-first century, and rightly so, because “we are all responsible for our planet”.  He asserted that if world leaders indeed accepted that they were accountable for the results they did or did not obtain, they should have the courage to evaluate and adapt the institutions and instruments at their disposal.  In that respect, Belgium was fully supportive of the efforts of the European Union to participate in a timely and effective manner in the General Assembly’s work.  He further lauded the creation of UN Women as a welcome development that had his country’s full support.

Turning his attention to important discussions on the reform of the Security Council, which he noted had been going on for quite some time, he expressed the hope that those negotiations would soon lead to concrete results.  He further stressed that his key message of increased responsibility and accountability also applied to certain situations in the world, such as those in the Democratic Republic of the Congo, Afghanistan and Pakistan.  In all the three situations, he urged the international community — with the United Nations playing a central role — to continue to stand by the people of those countries in helping them to find lasting solutions to the governance and democratization, the devastation and human suffering challenges they faced.

Also exercising his right of reply, Belgium’s representative reminded Iran that Belgium, as member of the European Union, fully adhered to the position repeatedly expressed by the Union with regard to the Iranian nuclear issue.