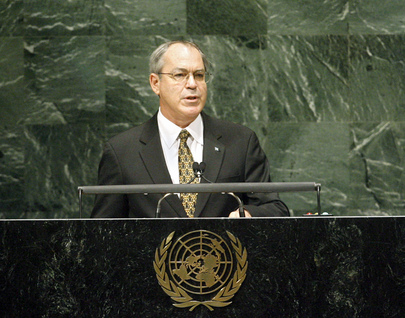 T. BRENT SYMONETTE, Deputy Prime Minister, Minister for Foreign Affairs and Immigration of the Bahamas, said that, despite global progress in the areas of poverty and education, the World Health Organization’s forecast that deaths from non-communicable diseases would increase worldwide by 17 per cent between 2005 and 2015, were exacting heavy tolls on finances and health systems of his and other developing countries. The Bahamas continued to place a high priority on attaining its Millennium Goals, but stressed it was “not out of the woods”. The fallout from the global and economic crisis continued to impact tourism - its chief economic engine and employer - and slowed recovery and expansion in other segments of the economy. In that regard, his Government accelerated the implementation of an infrastructure programme to accommodate new growth once the economy rebounds.

The Bahamas had made considerable progress in various areas, most notably, in enhancing its social net, expanding unemployment benefits and introducing new national prescription drug programmes to ensure that infants, school-aged children and the elderly received prescription medicines regardless of their ability to pay, he said. Overshadowing its success, however, was the imposing threat of climate change. The Bahamas was the fifth most vulnerable country to sea level rise and, despite its negligible greenhouse gas emissions, would suffer catastrophic results if emissions were not stabilized worldwide. A temperature rise of 2° C would result in sea level rise of two metres, which would leave 80 per cent of the territory under water.

Therefore, he said, in collaboration with other small island developing States, the Bahamas called on the international community to undertake “urgent, ambitious and decisive” action to significantly reduce emissions of all greenhouse gases, in addition to financial and technical support as the countries try to adapt to climate change. The Barbados Programme of Action for the Sustainable Development of Small Island Developing States remained the blueprint for action, which was reaffirmed in the Mauritius Strategy for Implementation. Regarding biodiversity, the Bahamas had established marine, coastal and terrestrial protected areas, and a national energy policy that focused heavily on the potential of renewable energy was well under way.

Turning to Haiti, he said there had been some progress over the past nine and a half months — “but not nearly enough”. Millions continued to languish in makeshift tent cities. He called on the United Nations to continue to mobilize assistance and assist in recovery and reconstruction. In its commitment to fighting terrorism and other transnational criminal activities, the Bahamas currently served as Chair of the Inter-American Committee against Terrorism, and recently hosted a workshop on counter-terrorism. Also, crime and security remained a threat to the people of the Bahamas and Caribbean subregion; for years, international trafficking of illegal drugs and small arms and light weapons had disrupted peace. Fighting those problems required large portions of annual budgets and the seemingly unlimited resources of drug cartels rendered its efforts insufficient. To that end, he endorsed the Arms Trade Treaty, which would be the focus of the upcoming 2012 Conference. In closing, he applauded the proclamation of the International Year of Youth and said the Bahamas was seeking to expand educational programmes and career-oriented programmes for youth at the Bahamas Technical and Vocational Institute. He also reaffirmed its commitment to tackling the country’s growing human trafficking problem to the fullest extent.