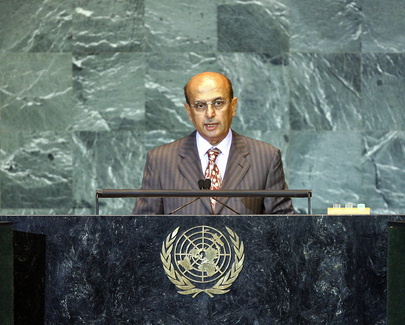 ABUBAKR AL-QIRBI, Minister for Foreign Affairs of Yemen, said his country was witnessing complex development challenges, including some that were a result of the world economic crisis and others deriving from a shortage of resources due to the fall of oil prices on international markets.  Shortages in water resources also presented challenges, as did the limited commitments of development partners.
In addition, he went on, the Government faced challenges from subversive groups that exploited religious doctrines to gain support for their causes.  The Government’s need to fight those saboteurs had led to the displacement of thousands of people.  The Government had dealt responsibly with the situation.  In cooperation with international organizations, it had provided safe camps and had implemented measures to meet the needs of the internally displaced persons within the population.
A state of emergency had been declared a number of times so as to open corridors and reach refugees with delivery of aid.  Each time, he said, the saboteurs had seized the opportunity to make false allegations against the Government.  In truth, the subversives had broken the accords to which they had agreed and the challenge they presented was growing due to the rise of Al-Qaida.  Some separatist elements were also taking advantage of growing freedom to pursue their aims even though a separatist policy had been rejected in 1994.
He asked donor States and development partners to extend generous support to promote the Government’s development programmes and to reduce the level of poverty in the country, recalling the fact that those were two very important elements in defeating terrorism.  He also said the Government was working to increase employment and improve its partnerships with civil society.  Mutual agreement had led to a postponement of April elections to allow for a reform of election law.  Meanwhile, the Government had taken measures toward the elections to come, by the appointment of local governors to decentralize the electoral process.
Turning to other situations, he called for a resolution of the Palestinian situation and said the unjust blockade imposed on Gaza was a total disregard of the Palestinian people’s rights.  Further, the Israeli policy was a contravention of all United Nations resolutions on the matter.  In Somalia, the international community must help rebuild the Somali structures needed for governing, and must lend support to the efforts of the Transitional Government.  All Somali parties must agree to cooperate in re-establishing the Government, and outsiders must keep from interfering.  The situation in Somalia presented serious socio-economic, political and health costs to Yemen.  The security of ports in the region must be reinforced.  And finally, Egyptian efforts to promote peace in Sudan were welcome.  The decision of the International Criminal Court with regard to Sudan’s leader must be nullified as it did not help to promote peace efforts in the region.