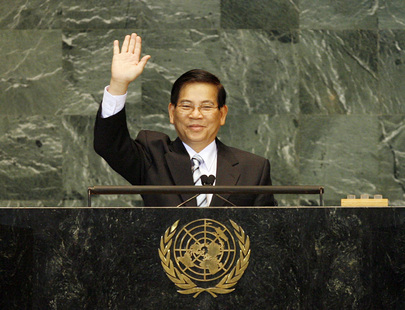 NGUYEN MINH TRIET, President of Viet Nam, said the year since the last Assembly was not a long span of time.  Yet, it had been characterized by many challenges, as all parts of the world suffered from the financial crisis and economic downturn.  That had further aggravated challenges in food security, energy security and climate change facing developing countries, in particular.  At the same time, during that same period, the international community had exerted enormous efforts -- in both thought and action -- to not only address the immediate problems, but also create a more sustainable foundation for the common peace and prosperity.
In due course, he continued, nations had been able to draw valuable lessons on governance over domestic development and gain a fuller understanding of the meaning of multilateral cooperation.  It was evident that no single country alone could respond to the financial and economic crisis, in addition to other global challenges.  Policies and measures of imposition and unilateral use of force to address international security and political issues would only result in more tension, confrontation and impasse.  Given the many difficulties, he was encouraged by the positive signs in the world economy.  Further, the first summit of the United Nations Security Council on nuclear non-proliferation and nuclear disarmament had highlighted the question of disarmament on the international agenda.
He invited the General Assembly to focus its deliberations on three critical areas.  First, fostering respect for the fundamental principle of international law and the United Nations Charter as the determinant for peace and security.  He said the United Nations should continue to make active contributions to easing tension and peacefully resolving outstanding disputes and conflicts, including those related to the Democratic People’s Republic of Korea and Iran.  With respect to the situation in the Middle East, he supported ensuring the rights of the Palestinian people and the legitimate interests of all parties concerned.  He fully supported the national reconciliation and reconstruction processes in Afghanistan and Iraq, and strongly condemned terrorist acts against civilians.   Viet Nam opposed the unilateral use of economic sanctions against developing countries and supported the United Nations General Assembly resolutions on the necessity of immediately ending the economic, commercial and financial embargo imposed against Cuba.
The second issue was an effective and comprehensive response to the economic crisis, he said.  In the short term, urgent measures must be taken to curb the pace of the downturn and minimize the impact of the crisis, particularly on the realization of the Millennium Development Goals in developing countries.  In the long term, the system of international economic relations, which had for quite a while shown many irrationalities, must be reformed  It was imperative to promote the role of the United Nations in designing international strategies and mechanisms to address the energy and food crisis, pandemics and climate change, including issues to be discussed in Copenhagen this December.
He said Viet Nam was of the view that United Nations reform should be conducted in all United Nations agencies, with Security Council reform conducted in such as way that broadened its representation and increased the democracy and transparency in its operational methodology.  Renewal of that mechanism should go hand in hand with renewal of content and due attention paid to a balance among fields of activity of the United Nations.  Additionally, he called for United Nations operations to be sufficiently resourced.
As a non-permanent member of the Security Council, he said Viet Nam was an active participant in, and an effective and responsible contributor to, the maintenance of the world’s peace and security.  He said Viet Nam strongly supported and contributed to the peaceful settlement of international disputes and conflicts, the fight against transnational crime, international terrorism and the promotion of disarmament and non-proliferation of weapons of mass destruction.  As a country that had experienced decades of war with devastating consequences, including the long-term effects of the toxic chemical Agent Orange, and as a country that had attained important achievements in development, Viet Nam had always endeavoured for the effective operation of the Security Council in supporting reconstruction efforts of countries emerging from conflict.
He said this year’s General Assembly was taking place at a crucial juncture.  The significant world changes of 2009 required corresponding policy decisions.  Only by standing shoulder to shoulder to enhance multilateral cooperation would the international community meet the expectations of the world’s peoples, and set out the directions for long-term development of the United Nations.