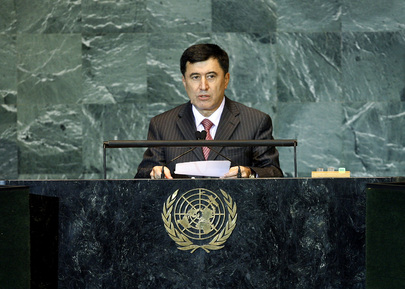 VLADIMIR NOROV, Minister of Foreign Affairs of Uzbekistan, said that States and institutions were making unprecedented efforts to overcome the global financial and economic crisis, but that regional and national anti-crisis programmes came at great cost and did not guarantee stabilization of the world financial market, growth in demand or the revival of the industrial economy.  Many large countries pursued protectionist policies and restricted access to their markets for goods from developing countries.  Measures taken by individual States must be coordinated globally, and new rules for regulation of the financial market must be developed to ensure greater control over the use of State and corporate financial assets by transnational and national banks.
Uzbekistan was using its own model to transition from centralized planning to a free market, and was currently carrying out an anti-crisis programme for 2009‑2012, he said.  Thanks to those measures, the country was macroeconomically stable, had steady annual economic growth of between 8 per cent and 9 per cent, low rates of inflation, was attractive to foreign investment and had seen increase in the general population’s real income.  During 2009, GDP has amounted to 8.2 per cent.
He spoke of environmental security and potential accidents at giant hydro-power installations in the region, which could seriously undermine the fragile ecological balance.  Referencing the accident, caused by human error and design flaws, at the Sajano-Shushenskaya power station in the Russian Federation, he expressed concern that similar installations were operating on the Amu-Darya and Syr-Darya border rivers, which provided water to the populations of all countries in the region.
Further, two large hydro-electric power stations were under consideration for the Ragun and Amu-Darya rivers without consideration for the shrinking glaciers that were the source of their waters or the fact that the proposed sites were in areas of strong seismic activity.  He insisted that such projects only be implemented following impartial studies by international experts under the auspices of the United Nations.
The war in Afghanistan, he said, was a principal source of concern for international and regional security.  There was no military solution to the “Afghan problem.”  The solution lay in the reconstruction of Afghanistan’s economy, its communication and social infrastructure, and in the involvement of the Afghan people in that process.  There had been no considered or well-organized negotiation process among parties to the conflict.
He stressed the importance of respecting the Afghan people’s historical and ethno-demographic roots and proposed the creation of a United Nations “Contact Group 6+3”, which would comprise all States bordering Afghanistan, plus the Russian Federation, the United States and NATO.  President Karimov had stressed that such an initiative involving neighbouring countries could produce an accord both in and around Afghanistan.
He further encouraged greater cooperation between the United Nations and regional groups.  As current chair of the Shanghai Cooperation Organization, Uzbekistan intended to develop a real partnership with the United Nations in such areas as security and stability, economic, social and humanitarian development and other spheres of mutual interest.  That would strengthen regional and international security and promote sustainable development in the region’s countries.  He called on Member States to support a draft resolution for “Cooperation between the United Nations and the Shanghai Cooperation Organization.”