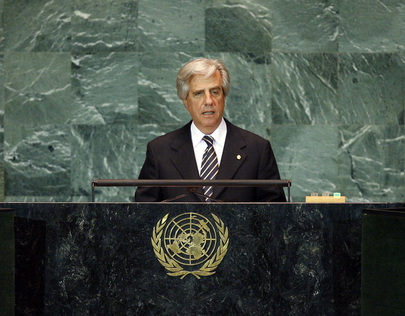 TABARE VAZQUEZ, President of Uruguay, demanded the immediate restoration of constitutional order in the Republic of Honduras and the restoration of those democratically elected by the Honduran people to their posts.  He further called for the integration of the American continent without exclusions, exceptions or embargoes, such as the one on Cuba, without second-class partners.  “We are all Americans,” he said, “and equals.”

As one of the main contributors of troops to United Nations Peacekeeping Operations, he noted that the difficulties encountered in the peacekeeping system -– such as their growing demand and complexity –- far from being discouraging, should be a stimulus to better coordination of efforts with other Member States and the Secretary-General to stabilize areas affected by conflicts, protect the civilian population, strengthen institutions and promote economic and social development of affected countries.  States must also cooperate in the fight against terrorism, while maintaining absolute respect for international law and human rights.

Uruguay, which had signed a wide range of human rights conventions, would be one of the first signatories to the Optional Protocol of the International Pact on Economic, Social and Cultural Rights, he said.  The country was also party to the main international conventions on the environment and sustainable development.

In a time of globalization, it was not only the economy that had to be globalized; “peace, freedom, democracy, justice, dignity and the welfare of the people must be globalized as well”, he said.  Among the many policy and actions undertaken by Uruguay to that end, was its firm commitment to tobacco-control policies.  Citing the World Health Organization (WHO) statistic that smoking was “the leading avoidable cause of death worldwide”, he noted that Uruguay had become the first smoke-free country in the Americas, which was no small matter when one considered it caused more than 5 million deaths annually.  His delegation had sponsored and promoted the resolution to create a smoke-free United Nations.  “It is a partial, but auspicious advance in the fight against this epidemic,” he said.

He also spoke of Uruguay’s efforts to become a country providing equal opportunity access to information technologies through the Ceibal Project, providing every student and teacher in the public primary school system with a laptop computer having Internet access.  He anticipated that, by the end of 2009, every student and teacher in the elementary school system would have received an XO prototype.  The programme developed intelligence and introduced deep changes in teaching and learning, offering equal access to information starting in childhood.  The project would provide knowledge that was indispensable for becoming a member of society and ensuring its proper functioning.

In closing, he quoted Michel de Montaigne, who had said: “There is no greater destiny for human beings than taking care of the task of being human.”  Five centuries later, it should not be remembered as something solely of the past, but something to be assumed as a task of the present.  “I believe there is no other option if we really want to survive as a species and to improve as human beings,” he said.