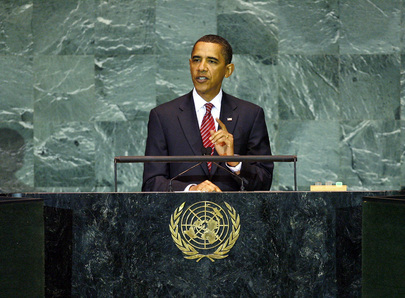 BARACK OBAMA, President of the United States, said that, while he had been in office for just nine months, he was aware of the expectations that accompanied his Presidency –- they were rooted in a discontent with a status quo that had allowed people to be increasingly defined by their differences and outpaced by their problems.  At the same time, such expectations were rooted in hope that real change was possible and that the United States would lead in bringing it about, he said.

He had come to office at a time when many viewed the United States with mistrust, but it was his deep belief that in 2009, more than at any other time, the interests of nations and peoples were shared.  Religious beliefs could forge new bonds or tear people apart.  Technology harnessed could light the path to peace or darken it.  What happened to the hope of a child anywhere could enrich the world –- or impoverish it.  “We must embrace a new era of engagement based on mutual interests and mutual respect,” he said.  “Our work must begin now.”

“America will live its values, and we will lead by example,” he said, noting that his Administration would work with all Members States to disrupt, dismantle and defeat Al-Qaida and its extremist allies.  In Afghanistan and Pakistan, the United States and others were helping to develop their Governments’ capacity to lead in that effort, and advance their peoples’ security.  In Iraq, it had removed American combat brigades from cities and set a deadline of next August to remove all such brigades from Iraqi territory.  He pledged to keep his promise to remove all troops by the end of 2011.

He said the United States had outlined a comprehensive agenda to seek a world without nuclear weapons.  In Moscow, the United States and the Russian Federation had announced they would pursue reductions in strategic warheads and launchers.  At the Conference on Disarmament, they agreed to a plan for negotiating an end to the production of fissile materials for nuclear weapons, and this week, the Secretary of State, Hillary Rodham Clinton, would become the first senior American representative to the annual Members Conference of the Comprehensive Nuclear-Test-Ban Treaty.

The United States also had re-engaged the United Nations, he explained, saying “we have paid our bills”, joined the Human Rights Council, signed the Convention on the Rights of Persons with Disabilities and fully embraced the Millennium Development Goals.  Some actions had yielded progress and others had laid the groundwork for it in the future.  But such efforts could not fall to America alone; all had to bear their share of responsibility for a global response to global challenges.

Recalling that peace rested on the cooperative effort of the world, Mr. Obama pointed out that the General Assembly had often become a forum for sowing discord.  Twenty-first century leadership demanded more, and no world order that elevated one nation over others would succeed.  “Old habits and old arguments are irrelevant to the challenges faced by our people,” he said, calling for building new coalitions that bridged old divides.  “The choice is ours:  we can be remembered as a generation that chose to drag the arguments of the twentieth century into the twenty-first …] or one that chooses to come together to serve the common interest of all human beings.”

With that, he put forward four pillars, fundamental to a future the United States wished to see, calling first on States to stop the spread of nuclear weapons and seek a world without them.  Today, the threat of proliferation was growing in scope and complexity.  Failing to act invited a nuclear arms race in every region.  A fragile consensus stood in the way of that frightening outcome -– the basic bargain that shaped the Nuclear Non-Proliferation Treaty (NPT), which outlined States’ right to peaceful nuclear energy and that those with nuclear weapons had the duty to move towards disarmament.

He said the United States would pursue a new agreement with the Russian Federation to substantially reduce strategic warheads and launchers, and complete a Nuclear Posture Review that opened doors to deeper cuts.  It also would host a summit next April reaffirming nations’ duty to secure nuclear material on their territory and help those unable to do so.  Such efforts must work to strengthen the NPT.

When International Atomic Energy Agency (IAEA) inspections were avoided and United Nations demands ignored, people were less safe and all nations were less secure, he said, adding that the Governments of North Korea and Iran threatened to take the world down that dangerous slope.  He was committed to diplomacy that opened a path to a more secure peace for both nations, but if they ignored international standards, they must be held accountable.  “We must insist that the future does not belong to fear.”

Turning to the second pillar –- the pursuit of peace -– he said efforts must begin with an unshakeable determination that the murder of innocent people would never be tolerated.  In confronting extremists that promoted conflict by distorting faith, he said the United States would forge partnerships, share intelligence, coordinate law enforcement and protect people.  The most powerful weapon in its arsenal was the hope of human beings –- the belief that the future belonged to those who built, not destroyed.

The United States would boost support for peacekeeping and energize efforts to prevent conflicts.  In the Sudan, he said, it would pursue lasting peace through support of people in Darfur and implementation of the Comprehensive Peace Agreement.  Elsewhere, from Haiti to the Congo to East Timor, it would work with the United Nations to support lasting peace.

In addition, the United States would continue to seek a just and lasting peace between Israel and Palestine, and the Arab world.  Just yesterday, he had met with Prime Minister Benjamin Netanyahu and President Mahmoud Abbas.  While progress had been made, he continued to call on Palestinians to end incitement against Israel, and reiterate that America did not accept the legitimacy of continued Israeli settlements.

He said the time had come to relaunch negotiations –- without preconditions –- that addressed the permanent status issues:  security for Israelis and Palestinians, borders, refugees and Jerusalem, he said.  The goal was clear:  two States living side by side in peace and security -– a Jewish State with true security for all Israelis, and a viable, independent Palestinian State with contiguous territory, that ended occupation begun in 1967.  The United States would also pursue peace between Israel and Lebanon, Israel and Syria, and a broader peace between Israel and its many neighbours.

Turning to the preservation of the planet, he said the danger posed by climate change could not be denied and nations’ responsibility to meet the challenge could not be deferred.  Without action, efforts to end conflict would be eclipsed by wars over refugees and resources; development would be devastated by drought.  “The days when America dragged its feet on this issue are over,” he said, adding that the country would press ahead with deep cuts in emissions to reach the goals set for 2020, and eventually 2050.

On the final pillar –- creating a global economy that advanced opportunity for all people –- he said the world was still recovering from the worst economic crisis since the Great Depression.  Across the globe, there were promising signs, yet little certainty about what lay ahead.  At the upcoming G-20 meeting in Pittsburgh, the United States would work with the world’s largest economies to chart a course for balanced growth.  That would mean vigilance, to ensure efforts did not let up until people were back to work, rekindling demand, and strengthening regulation for all financial centres.

Indeed, there was a moral and pragmatic interest in the broader questions of development.  The United States had set aside $63 billion to carry forward the fight against HIV/AIDS, to end death from tuberculosis and malaria, to eradicate polio, and strengthen public health systems.  The United States would join others in contributing H1N1 vaccines to the World Health Organization.

Growth could not be sustained unless all embraced their responsibility.  Wealthy nations had to open their markets to more goods, and reform international institutions to give more countries a greater voice.  Developing countries had to root out corruption that precluded progress.  The United States would support honest police and independent judges, civil society and a vibrant private sector.

“Our goal is simple:  a global economy in which growth is sustained and opportunity is available to all,” he said.  Such changes would not be easy but he believed the world’s people hoped that for their children.  Democracy and human rights were essential to achieving such goals.  The test of leadership would not be the degree to which nations fed the fears of their people.  As an African American, he would never forget that he would not be here today without the steady pursuit of a more perfect union in the United States.  While America had too often been selective in its promotion of democracy, that only reinforced its commitment.

“We have reached a pivotal moment,” he said.  “The United States stands ready to begin a new chapter of international cooperation -– one that recognizes the rights and responsibilities of all nations.”  With confidence in its cause, and commitment to its values, the United States called on all nations to help it build the future people deserved.