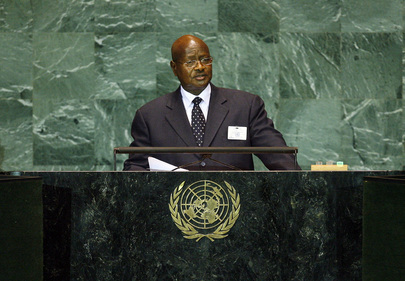 YOWERI KAGUTA MUSEVENI, President of Uganda, said Africa had gotten grasp of the development compass in the last 15 to 20 years.  Uganda’s economy had grown at the rate of 6.5 per cent a year for the two decades and had grown 7 per cent the last year, despite the global recession.  Those reasonable rates of growth had been achieved despite the fact that three vital infrastructural elements remained to be resolved decisively.

In the areas of electricity, roads and railways, he said progress had been slow due to a dependence on foreign funding, which tended to be frivolous and erratic.  Rising tax collections have now put Uganda in position to fund projects in those areas and foreign investments were welcome, of course.  But Africa could no longer be held hostage to foreign funding in those vital infrastructural areas in which there were shameful global inequities.  The United States, for example, had an electrical usage rate of 14,124 kilowatts per capita per year, while Africa had 574, and some African countries had rates as low as 9 kilowatts.

How could growth and transformation be expected in such a situation, he asked, and said the whole of Africa needed to “wake up” and cooperate on finding solutions to that matter and to the poor condition of roads.  In China, the cost of transporting a ton of cargo between Beijing and Shanghai by rail, was $12.  In East Africa, the cost was $65.

He said another two bottlenecks were related to the export of raw materials and the lack of progress in modernizing subsistence and traditional agriculture.  The present process of exporting raw materials was called “modern slavery” by many Africans since it brought in only 10 per cent of the final processed product.  The modernization of farming meant the implementation of initiatives to improve products and equipment, irrigation systems, breeding stocks and agro-practices.

Africa was entering a phase of growth and transformation, he said.  Uganda had faired well during the recession because of regional trade, but it would do much better when the three infrastructural elements of roads, electricity and railways were in place.  Africa had great growth potential that was not yet tapped and multilateral action would unlock the dormant potential.  The situation was similar to the current global crisis, which had been caused by lax regulations in managing the world’s economics.  Multilateral actions had been required to stop money-laundering and to strengthen regulations.

In conclusion, he said African countries had a double task.  One was to transform their economies from pre-industrial to modern ones.  The other task was to cope with problems caused by others, such as the global financial crisis and environmental deterioration.  The need for dialogue among civilizations was long overdue.