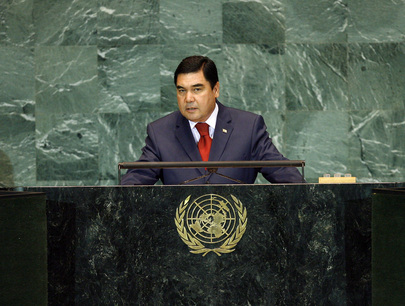 GURBANGULY BERDIMUHAMEDOV, President of Turkmenistan, said today’s world demanded closer coordination among States and international organizations.  How effective that interaction was would determine how global problems of ecology, energy, food, water distribution and poverty would be solved.  It would be impossible to discuss achieving those goals without reaffirming the United Nations’s most important role.  For more than 60 years, it had been the main guarantor of universal peace, security and development.

Regarding United Nations reform, he said the Organization had to improve its effectiveness.  Reform must be sensible, targeted and related to the global community’s real needs.  Supporting efforts to bring more openness to the United Nations, he said the Security Council’s structure had to be improved, notably to create closer interaction with the General Assembly.

He said the permanent neutrality of Turkmenistan, and features of its legal status, provided opportunities for positive influence on the process in the Central Asia and Caspian Sea region.  The idea would be to create permanent mechanisms for discussing regional problems and working out mutually acceptable decisions.  Security of one country could not be guaranteed in a lack of regional security.

On energy, he said discussion centred not on accepting preventive measures or local agreements on aspects of fuel transport, but on the creation of a new, universal model of relations in the world energy space –- those based on a multilateral balance of interests.  In line with a General Assembly resolution on “Reliable and stable transit of energy resources and its role in securing stable growth and international cooperation” (2008), Turkmenistan had held a high-level international conference on that issue.  A proposal from it outlined the creation of a legal document on the transit of energy resources, which would take into account proposals of interested countries and organizations.  Turkmenistan fully supported that idea and called on interested States to put forward proposals.

Taking up disarmament and reduction of weapons arsenals, he said countering distribution was a main issue on the global agenda.  Turkmenistan was convinced that the fewer armaments, the more stable the world’s development.  All countries in his region were parties to the 2006 Treaty that established a nuclear-free zone in Central Asia, and he called for holding an international conference in the first half of next year under United Nations auspices.  He also welcomed proposals aimed at assisting global disarmament processes.

Among the most serious issues today was effectively countering international terrorism, illegal drug trafficking and trans-border organized crime, he said. Such problems were especially important in his region and only through joint efforts could those threats be resisted.  The United Nations should increase its participation in coordinating models of international cooperation that aimed to neutralize those threats.

Turning to the revival of Afghanistan, he said Turkmenistan would continue to provide assistance to that country for reconstruction, and social and humanitarian purposes.  The United Nations, with its peacemaking experience, should suggest new political-diplomatic models for solving Afghanistan’s problems and take into account the potential of the United Nations Regional Centre for Preventive Diplomacy for Central Asia.

The serious after-effects of the world financial and economic crisis demonstrated the need to join efforts in shaping a global architecture of security and establishing conditions for equal relations among States, based on recognized international legal norms, he said.  Responsibility, morality and humanism were criteria that current and future generations would use to assess the Assembly’s work.  As a member of the world community, Turkmenistan would contribute to strengthening the high principles in such international affairs.