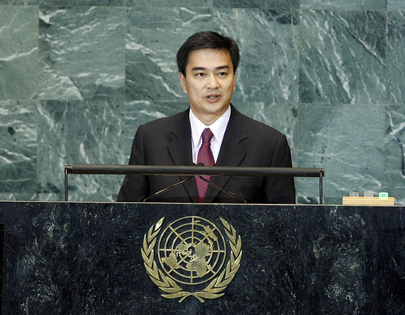 ABHISIT VEJJAJIVA, Prime Minister of Thailand, enumerated the many challenges facing the international community and noted that they could only be resolved through international cooperation. Thailand was prepared to share the lessons it had learned from its own financial crisis in 1997. Peace and security, development, and human rights were intertwined and must reinforce each other so that all three pillars would be sustainable. Moderation was the key to sustainability. Excessive greed had caused the economic crisis. Economic development and modernization must be better balanced and should take into account the economic, social, political and environmental needs of the people for the country to be resilient and protected from both external and internal shocks.

He said that the philosophy of a "sufficiency economy", initiated and pursued by the King of Thailand, was being emulated in many parts of the world. A more prudent investment approach, entailing rational decision-making and careful risk management, had allowed most of Thailand's financial institutions to escape the direct impact of the current crisis. As development was about the quality of growth, and not just the quantity, Thailand had boosted Government spending and investments to jumpstart the economy and had also cast social safety nets, making education reform a priority and upgrading health and welfare services. Investments were directed at providing greater economic opportunities for people at the grass-roots level. Thailand's growth was people-centred.

As Chair of the Association of Southeast Asian Nations (ASEAN), Thailand had led regional efforts to address the financial crisis and was expediting the Chang Mai Initiative under the framework of ASEAN + 3, with the aim of building regional financial stability through a regional self-help substantive reserve pooling arrangement, which would soon come into effect, he said. The region was also liberalizing trade and rejected all forms of protectionism.

Today's financial woes also exacerbated poverty, hunger and energy shortages, felt most strongly in the developing world, he continued. Although Thailand had already attained its Millennium Development Goals in hunger and poverty elimination, more remained to be done. Thailand was ready to share its experiences in managing and overcoming the challenges facing developing countries. As a major agricultural economy, with strong experience and capability in developing alternative energy, it was ready to contribute to the solution of the world food and energy crises.

On climate change, he said that the United Nations Framework Convention on Climate Change (UNFCCC) provided the core for international negotiations and cooperation, guided by the principles of common but differentiated responsibilities. Thailand would spare no efforts to ensure that the upcoming climate change talks in Bangkok next week would make tangible progress towards a successful Copenhagen Conference in December. He further welcomed the commitments expressed by the major economies during the Secretary-General's Summit on Climate Change, particularly with regard to setting clear goals and targets for their actions. Thailand vigorously pursued environmentally friendly growth and had made significant investments in producing energy crops.

It was equally important to see that the people's political needs were met through sowing the seeds of democracy and supporting human rights and freedoms. Democracy entailed ensuring the rights of minorities in addition to majority rule. At the regional level, human rights were at the forefront of ASEAN's agenda. The ASEAN Intergovernmental Commission on Human Rights would begin its activity in October. Promotion of gender equality and women's empowerment were important to Thailand. ASEAN was also in the process of establishing a commission on the promotion and protection of the rights of women and children which would strengthen the ASEAN human rights framework overall.

Internationally, Thailand was committed to rendering humanitarian assistance to those in need, he said. He noted that Thailand had become the hub for the massive international relief effort for Myanmar following Cyclone Nargis. Sustainable economic, political and social developments would ultimately ensure long-lasting peace and security. For that reason, ASEAN was moving towards becoming both a political-security community and an economic and sociocultural one by 2015. Its regional efforts would contribute to peace and security regionally and internationally.

Thailand itself played a significant role in peacekeeping operations worldwide, having provided 20,000 military troops, police officers and civilian staff to peacekeeping missions around the world. It was also a member of the United Nations Peacebuilding Commission and, as such, believed in building the right socio-economic and political conditions for sustainable peace in countries emerging from conflict and internal strife. For that reason, Thailand had put itself forward as a candidate for a non-permanent seat on the Security Council from 2017-2018. As a medium-sized developing country, it could represent the interests and concerns of developing countries worldwide.