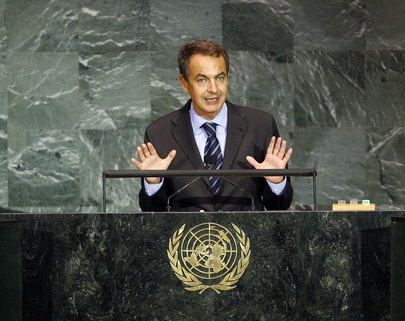 JOSE LUIS RODRIGUEZ ZAPATERO, President of Spain, focusing on the global financial meltdown, said that, despite possible signs of recovery, all were still concerned about the future.  Rules had not been put in place to prevent a recurrence of the crisis, and it would be up to the G-20 to establish a basis on which to deal with such issues.  While this was not the first global economic upheaval, it was, indeed, the first crisis of global governance.

All nations were obliged to learn lessons -- certainly about economic and financial issues -- but also other challenges that needed a global response, including the need for coordinated, political, multilateral action.  Social and economic development would not be possible without the creation of adequate security conditions.  With that, he called on States to avoid failure in combating hunger, poverty and climate change, and in the fight to prosecute organized crime, piracy and terrorism.  A great opportunity was within reach, he added.

For its part, Spain was committed to multilateralism and building a system of global governance.  Indeed, multilateralism was not just a procedure for resolving conflicts.  To be effective, it required two promises to be fulfilled. Multilateralism was inseparable from faithfulness to human rights, democracy and equality for all.  The firm defence of democracy had a name:   Honduras.  “We’re not going to accept an anti-democratic coup,” he said.

In addition, multilateralism required a climate of dialogue, respect and recognition among countries, regions and civilizations.  Recalling his proposal to create an Alliance of Civilizations, he said Spain was pleased to see that the number of members participating in the Group of Friends had increased.  The Alliance’s third forum would be held in Rio de Janeiro, Brazil, next year.  He had noted the General Assembly President’s proposal to address dialogue for peace, security and international development, and said the time had come for the Assembly to approve a resolution that would give a Charter to the Alliance.

In the area of security, he said the new multilateralism allowed for the prohibition of antipersonnel land mines and cluster bombs, and now there was a chance to abolish nuclear weapons.  Countries today were discussing the greatest arsenal reductions ever seen.  Spain renounced nuclear weapons and called for strengthening the Non-Proliferation Treaty (NPT), a goal that coincided with Spain’s Presidency next year of both the European Union and the NPT Review Conference.

On peacekeeping, he shared concern at the situation in Afghanistan, and was confident that the international community would find solutions, not all of which would be military.  In addition, the search for peaceful solutions in the Middle East had to continue, and the global community should consider recognizing a State of Israel and a State of Palestine.

Turning to the issues of poverty and hunger, he called the fact that so many people around the world faced hunger daily an unjust situation in the twenty-first century.  Indeed, there was a radical imbalance in peoples’ living conditions. Questions about international peace and security must go hand in hand with a renewed fight against poverty, and States must not yield to the temptation to avoid fulfilling commitments to the most vulnerable.  With the 2015 deadline in sight, the Millennium Development Goals could still be achieved.  Discussing Africa, he said the twenty-first century should belong to a continent that had too long been dispossessed.  For its part, Spain was a large donor to Africa had made commitments in the area of food security.