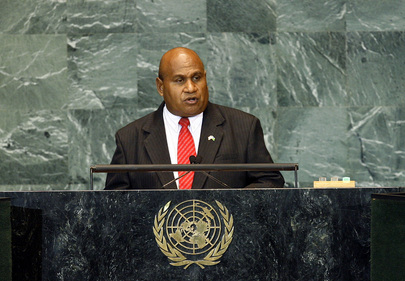 FEDRICK FONO, Deputy Prime Minister of the Solomon Islands, said economic growth in his country had fallen drastically because of the world economic crisis and he therefore welcomed the outcome of the June Financial Crisis Conference, including its call for the reform of the Bretton Woods institutions.  He also expressed hope that there would be more stimulus funds available for the poorest of the poor.
As small island and least developed countries were also under great threat because of climate change, he called for urgent measures to assure that the global average temperature does not increase more than 1.5° C.  In that context, he also expressed hope that financing and technical assistance for the prevention of deforestation would be incorporated into any agreement in Copenhagen.
In the area of peace and security, he called for a firm commitment to a “holistic multilateral disarmament negotiation”.  He also spoke of the progress that had been achieved, following the conflict in his country, along with the Regional Assistance Mission to the Solomon Islands (RAMSI).  This year, the relationship with RAMSI had progressed from one of assistance to one of partnership, and he expressed hope that that partnership could interact more with the United Nations.  He said that the Truth and Reconciliation Commission had allowed the Solomon Islands to face its troubled period with courage.
He supported a review summit on the Millennium Development Goals as well as on the Mauritius Strategy for least developed countries next year.  His country was poised to make some gains in achieving the Goals through various partnerships, including those on education with New Zealand and China, and those on eliminating malaria with Australia.  China, the European Union and other partners had assisted the rural development policy.  His country had also taken steps to develop human resources in tourism, agriculture, fisheries and the mining sector to offset projected revenue losses from reduced harvesting of forests.  South-South cooperation was also a major factor in his country’s development efforts.
In other areas, he called for hastened reform of the Security Council and for a fully-fledged United Nations presence in his country.  Having submitted extended coastal territorial claims, his country looked forward to working with the Continental Shelf Subcommittee.  Regional countries have met to work collaboratively on the conservation of marine species that populate the seas in the area.
He asked for United Nations support to his country’s national statistics office, and invited investment in infrastructure, noting that the country had opened up telecommunications to competition.  He called for the Human Rights Council’s Universal Periodic Review to be the reference point for assessing countries’ human rights situations.  He expressed hope that positive interaction between the People’s Republic of China and Taiwan would continue, and that the latter’s admission to United Nations forums could expand.