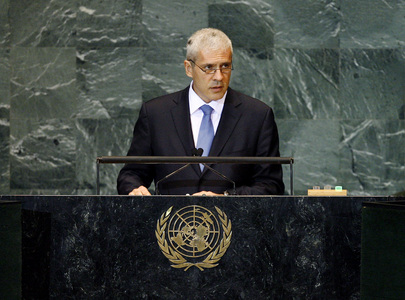 BORIS TADIĆ, President of Serbia, said safeguarding the United Nations Charter was much more important than the policies of any single nation, especially in transformative periods such as the current time.  International systems were undergoing a paradigm shift of a scope comparable to that of 1945 and 1989.  Many interrelated factors had expedited the new set of international circumstances, and the global balance of power was shifting as new financial models competed for primacy.  In that regard, achieving consensus on fundamental issues had never been more important, he said.
He said that enhancing dialogue between civilizations, providing for sustainable development and eradicating poverty were the only effective ways to fight terrorism and cross-border organized crime, and to promote nuclear disarmament.  It was also vital to cooperate on combating the effects of climate change, which he said would continue to be strongly emphasized over Serbia’s two‑year presidency of the Governing Council of United Nations Environment Programme (UNEP).  Integral to those efforts was the proposed establishment of a regional climate change centre in Belgrade.
He underlined the necessity of agreeing on a fair and balanced emissions‑reduction scheme, in particular on a new climate agreement that would secure eco-friendly investments, stimulate innovation and facilitate the global spread of technologies, knowledge and experience.  Working towards a “green economy” would decisively contribute to putting the whole world firmly on a cleaner, more sustainable path.
Turning to the unilateral declaration of independence by the ethnic Albanian authorities of Kosovo and Metohija, he said Serbia had become caught at the heart of one of the most dangerous challenges to the universality of the international system since the founding of the United Nations.  That attempt of secession stood in direct violation of Serbia’s democratic Constitution, and the basic principles of the United Nations Charter, the Helsinki Act and Security Council resolution 1244 (1999).  Kosovo’s independence declaration was an attempt to “impose a nineteenth century outcome to a twenty-first century challenge”.  He stressed that Serbia would never, under any circumstances, implicitly or explicitly recognize that declaration.
In that regard, he said Serbia had ruled out the use of force and had chosen to respond to Kosovo’s unilateral declaration with the utmost responsibility and restraint, and was opting for a diplomatic approach.  Thus, he said that a “vast majority” of United Nations Member States had refrained from recognizing Kosovo’s unilateral declaration of independence.  Serbia had decided to contest the issue before the International Court of Justice.
He said the Court had concluded the preliminary written phase of the proceedings, and verbal hearings were scheduled to begin on 1 December 2009, with a decision expected some time next year.  The outcome would either strongly deter other separatist movements from attempting to secede, or encourage them to act in similar fashion.  If Kosovo’s declaration was allowed to stand, he said, the door would be opened for challenging the territorial integrity of any United Nations Member State.  He appealed to Member States to not prejudge the Court’s deliberations or obstruct its work, and let it be uninhibited by political pressures.
He went on to say that Serbia maintained support for a reconfigured United Nations Interim Administration Mission in Kosovo (UNMIK) and its continuing indispensability, and welcomed the status-neutral European Union Rule of Law Mission (EULEX) working in the southern province, on the basis of Security Council resolution 1244 (1999).  He called on all responsible stakeholders invested in the future of Kosovo to work more closely with the Government of Serbia on fully implementing the Secretary-General’s six-point plan, welcomed by the Security Council in November 2008.
Speaking of Serbia’s desired entry into the European Union, he said that despite setbacks, the country’s core strategic priority remained becoming part of the European Union, not just for economic prosperity, but due to the essential shared values.  Modernizing efforts had also led to an upgrade of the administrations and, among other things, the protection of minorities and the redoubling of efforts to ensure regional stability.
He said Serbia was ready to have full cooperation with the InternationalCriminal Tribunal for the former Yugoslavia, which was an essential moral obligation for future generations.  As the twentieth anniversary of fall of the Berlin Wall, the international community must not forget to bring all nations of Europe under the same roof.  Still, he said, much remained to be done.
With regards to Bosnia and Herzegovina, he said Serbia was a guarantor of the Dayton Agreement.  As the “strategic anchor of stability” in the Western Balkans, Serbia would invest ever greater efforts to complete the democratic transformation of “our part of Europe”.  Serbia’s “robust European vision” was complemented, he said, by its strong determination to pursue a carefully balanced, artfully executed and active foreign policy aimed at engagement with nations throughout the world.