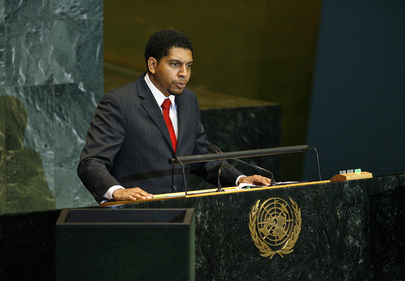 CAMILLO GONSALVES ( Saint Vincent and the Grenadines) said there was an issue under all the other current challenges:  “A struggle by the powerful to cling to their dominion, long after the legitimate bases of their power have faded.”  He went on to criticize the Security Council, the Bretton Woods institutions and the blockade on Cuba.  Noting that the G-20 suffered from a lack of legitimacy, he said the geopolitical status quo remained.  “Although we have a seat in this hallowed building, it is often the seat of a spectator in a historical drama.”  On the subject of the global economic and financial crisis, his country suffered from its consequences, although it had played no part in its creation.
Saint Vincent and the Grenadines faced three threats:  globalization; climate change; and stigmatisation, he continued.  The World Trade Organization (WTO) had destroyed the country’s trade in bananas; changing weather patterns threatened tourism; and the G-20, the Organisation for Economic Cooperation and Development (OECD) and other organizations discriminated against the Saint Vincent and the Grenadines when they claimed to be rooting out so-called “tax havens”.  Another menace was the illicit trade in firearms and narcotics.  His country, which produced neither a gun nor a kilo of cocaine, was awash in weapons and drugs, he said.
The citizens of Saint Vincent and the Grenadines would soon vote on a new constitution to transform the country into an independent republic, he announced, before turning to the subject of international relations.  It was necessary for multilateral cooperation to be inclusive and participatory and, to that end, poor and developing countries were urged to help remake the United Nations.  The global economic and financial crisis, poverty and development weren’t academic issues; climate change wasn’t theoretic and United Nations reform wasn’t a “diplomatic parlour game”, he said, and concluded:  “We stand now in the autumn of our discontent.  But, as Gandhi said, ‘healthy discontent is the prelude to progress’.”