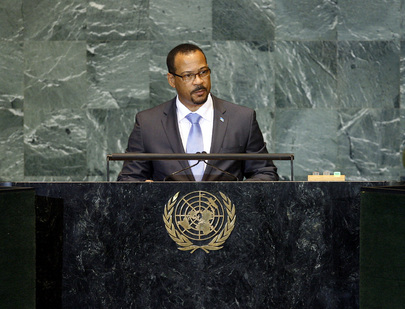 RUFUS GEORGE BOUSQUET, Minister for External Affairs, International Trade and Investment of Saint Lucia, said Governments in the developing world were still struggling to meet their development targets, including the Millennium Development Goals.  “Few, if any, foresaw that the winds would be contrary, the storms fierce and the course ahead so challenging,” he said, adding that developing countries were still struggling to find calmer waters.  Despite the crisis, Saint Lucia had made significant progress on poverty and hunger, universal education and gender equality.  However, there was more work to do in the areas of child mortality and maternal health.
“We in Saint Lucia, though, observe the current global state of affairs through bifocal lenses,” he said.  “We see both challenge and opportunity, an opportunity to take bold new steps and think outside the box on tackling the issues that confront us,” he said.  Describing climate change as the most serious challenge facing humankind today, and calling for an urgent collective response, he said his country was working to formulate policies and legislation aimed at developing renewable energy sources, including wind, solar and geothermal sources.  Saint Lucia had joined other Caribbean Community (CARICOM) member States in establishing early-warning systems to predict natural disasters.
CARICOM members had also adopted the Liliendaal Declaration on Climate Change and Development to protect the region’s marine resources and ecosystems, he said.  Small island developing States and least developed countries had joined together “to demand, appeal and even beg, if necessary, that the new Copenhagen climate agreement limit temperature increases to the attainable level of 1.5° C, as possibly anything above that will be devastating to our existence”.  Saint Lucia was in “crisis-management mode”, but crisis-management measures must be taken with sustainable development in mind.