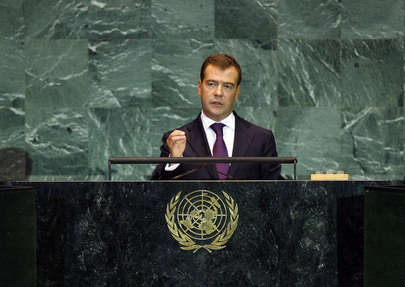 DMITRY MEDVEDEV, President of the Russian Federation, said the current session was taking place at a very crucial and uneasy point in time, with an economic crisis, regional conflicts, food shortages and climate change.  The agenda had been dictated by life itself, and that, in turn, dictated the growing demand for the United Nations as a tried and tested mechanism for the harmonization of various countries’ interests.  As never before, the international community was feeling the need for informal collective leadership, increased role of such formats as the G-8 and more recently the G-20, as well as other negotiation and mediation fora.

Another distinctive feature of modern times related to an increasing role of regional entities, he said.  That trend was entirely consistent with the principles of the United Nations Charter.  His country, for its part, would continue to strengthen the mechanisms of regional interaction together with its partners across the Commonwealth of Independent States (CIS) and in the framework of the Shanghai Cooperation Organization and BRIC ( Brazil, Russian Federation, India and China).  Those mechanisms helped their members to respond collectively to common threats, mitigate the consequences of crises and increase the sustainability of their national economies.

Among the problems that could not be effectively resolved without the United Nations, he mentioned the imbalance of existing world economy governance mechanisms, the inadequacy of their “rules of the game”, and the chasm between financial markets and real economy.  With the Millennium Development Goals under a threat of disruption, donor assistance to the countries in need could not be put off until later.  The arrangements made at the G-20 summits and the United Nations conference on the world financial and economic crisis must be implemented within the deadlines that Member States had set.  It was also important to address the issues of global energy security.  His country had recently solidified the principles of a new legal framework for cooperation that had been formulated at the Saint Petersburg G-8 Summit three years ago, and was now inviting everyone to engage in further constructive discussions in that regard.  Those discussions should be conducted with an active involvement of specialized multilateral institutions, including the agencies of the United Nations system.

His country also deemed it important to strengthen the United Nations itself, he continued.  The Organization must adapt to the new world realities, strengthen its influence and preserve its multinational nature, as well as the integrity of the Charter provisions.  The reform of the Security Council was an essential component of that revitalization.  The time had come to step up the search for a compromise formula of its expansion and increased efficiency.

Turning to disarmament, he mentioned a Russian-Chinese initiative regarding a treaty on the prevention of the deployment of weapons in outer space, as well as the proposal to universalise the Russia-United States Treaty on the Elimination of Intermediate-Range and Short-Range Missiles.  The Russian Federation was steadily following the path of verifiable and irreversible reductions in nuclear weapons as an essential element of “a new start” in its relations with the United States.  Presidents Obama and Medvedev had signed a relevant document in Moscow last July, and a mandate for further negotiations had been agreed upon -- to elaborate a legally binding treaty, which should replace the Treaty on the Reduction and Limitation of Strategic Offensive Arms, which would expire in December.  The recently announced adjustments to the United States plans for a missile defence system -- a subject of his meeting with President Obama today -- represented a constructive step in the right direction.  His country was prepared to engage in a thorough discussion of the United States proposals and relevant Russian initiatives regarding cooperation in that area.

Real progress in nuclear disarmament was impossible without addressing national missile defence and non-nuclear strategic offensive arms potential.  He expected work on a new treaty to fully take into account relevant provisions of the joint document endorsed by the Presidents of the United States and the Russian Federation during their meeting in Moscow.  Other nuclear States should join the disarmament efforts.  There was no need to wait for further progress in Russia-United States disarmament.  It was possible to start elaborating acceptable and practical arrangements, taking into account the difference in the size of potentials.  The 2010 Treaty on the Non-Proliferation of Nuclear Weapons (NPT) Review Conference would focus on the issues of nuclear disarmament, strengthening of the nuclear non-proliferation regime and a peaceful atom.  A global summit on nuclear security next April would also present a good opportunity to continue those discussions.  The Russian Federation had agreed with the United States Administration on joint steps for further progress in such aspects of nuclear security as prevention of nuclear terrorism and expanding access for all members implementing the Nuclear Non-Proliferation Treaty in good faith to the achievements of a peaceful atom. He called for collective cooperation on those matters.

As a member of the Quartet, Russia supported the efforts aimed at strengthening the nuclear-non-proliferation regime in the Middle East, he said.  His country had made specific proposals in the framework of the NPT Review in that regard.   Russia had also made proposals within the framework of the six-party talks in connection with the mechanism to ensure peace and security in North-East Asia.

Turning to regional conflicts and security, he recalled “a reckless attempt of Georgia’s authorities to resolve the problem in its relations with South Ossetia by military means”.  To avoid the repetition of the events of August 2008, it was necessary to have clear and effective mechanisms to implement the principle of the indivisibility of security.  Without that, it would be impossible to overcome the legacy of the past, its instincts and prejudices.  Moreover, irresponsible regimes should not have any opportunity whatsoever to cause disputes among other countries.  The role and place of modern nations in ensuring global security was one of the most relevant topics.  Such issues had been the focus of discussion at an international conference in the Russian city of Yaroslavl.  The outcome of that discussion was that the future belonged to “smart politics”.  The current global crisis was not only the crisis of economy, but also a crisis of ideas.  It accumulated “a critical mass” of outdated policies and development models.

The Russian Federation had introduced an initiative to sign a European security treaty and proposed a fresh look at that problem, he said.  The initiative concerned the Euro-Atlantic space, but its key provision on indivisibility of security was a universal principle applicable to all regions of the world that was fully consistent with the Charter of the United Nations.

Referring to the growing nationalist moods, numerous manifestations of religious intolerance and animosity, he said it would be extremely useful to establish a high-level group on interreligious dialogue under the United Nations Educational, Scientific and Cultural Organization (UNESCO) Director-General.  That was especially relevant on the eve of the year for Rapprochement of Cultures in 2010.

He added that, on the eve of the sixty-fifth anniversary of the end of the Second World War next year, Russia had made a proposal to adopt a General Assembly resolution on the matter and hold a special session to commemorate all victims of that war next May.   Attempts were being made to whitewash Nazism, deny the Holocaust and revise the decisions of the Nuremburg Tribunal.  Firm and joint resistance to the manifestations of neo-Nazism and attempts to revise the outcome of the Second World War should remain a priority task for the United Nations.