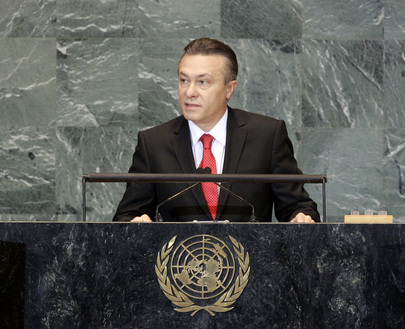 CRISTIAN DIACONESCU, Minister for Foreign Affairs of Romania, said that in the 20 years since the “Autumn of Change” and the fall of the “Iron Curtain”, his country had established a commitment to tolerance, rapprochement and confidence-building in international debates.  Today, facing the most challenging and intertwined crises, he hoped that Member States would respond to those circumstances as an opportunity to create solutions and transform the world.

He pointed out that climate change knew no boundaries.  All nations had common responsibilities towards one another and what was happening in the Pacific was also the business of someone living in a European city.  In addressing the global financial crisis, he observed that the world’s financial system no longer met the needs and realities of these times and the institutions monitoring it needed reform and an early prevention and warning mechanism be developed.  The United Nations would be the appropriate organ to be entrusted with coordinating these necessary changes.

Continuing, he mentioned two projects that illustrated Romania’s innovative and pragmatic approach to creating a twenty-first century multilateralism.  One was, in cooperation with Office of the United Nations High Commissioner for Refugees (UNHCR), the first ever emergency transit centre for refugees in Timisoara.  The second was the signing of a Memorandum of Understanding between Romania and the United Nations for the training of United Nations close protection personnel at the Centre for Excellence of the Romanian Protection and Guard Service.

He also said that the solutions to these twenty-first challenges needed to utilize in a fuller capacity the regional mechanisms such as the African Union, ASEAN and the Gulf Cooperation Council, to name a few.  Such regional groups, with the appropriate support, could establish political will and, when necessary to maintaining peace and security, act swiftly and decisively.  To that end, while on the Security Council in 2005, Romania had promoted resolution 1631.  Although much had been done in that respect, it was of his opinion that Chapter VIII of the United Nations Charter was still underutilized.

Noting that violence led to further violence, he stated that a stable world would be elusive unless certain shared values were in place and engaged by all.  “Democracy and the rule of law is society’s immune system”, and he concluded that stepping forward to challenge the current crises was not just a question of funding, but also about engaging the principles of human rights.  “There is no challenge is too great for our nations if we remain united.  There is no danger so hard that can’t be overcome if we mobilize our wisdom and our capabilities.”