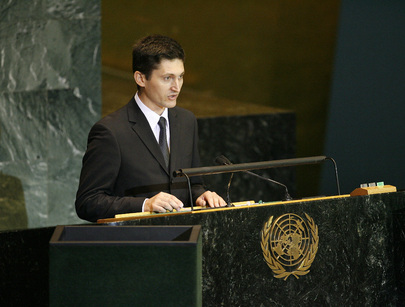 ALEXANDRU CUJBA ( Republic of Moldova ) said a reformed, robust and effective United Nations was needed to deliver prompt reactions and sustainable responses to today’s global challenges.  Moldova supported the ongoing process of reform of the Organization, and he said the expansion of the Security Council was a matter of equity and efficiency.  That body must reflect the legitimate aspirations of regional groups, and it was also necessary to allocate an additional non-permanent seat for the Eastern European group.
Regarding the global financial crisis, he said his country’s previous communist Government in Chisinau, the capital, had denied the crisis’ existence during 2008.  It was only after the previous Government’s defeat in July elections that officials began to sound the alarm.  The current Administration, the Alliance for European Integration, had assumed the responsibility for managing the crisis by taking several actions, including attracting funds from international financial organizations, securing foreign investment, and reviving the real sector of the economy.  It also relied on the support of European institutions and international structures to promote the rule of law, safeguard human rights, and ensure democratic institutions functioned.
With respect to the peaceful resolution of conflicts, Moldova believed that the demilitarization and democratization of the Transnistrian region was indispensable for a viable solution to the Transnistrian problem.  The new liberal democratic governance coalition planned to take measures to identify a solution to that problem in the current 5+2 format.  Moldova would revive its efforts to withdraw foreign troops from the country, replace the present peacekeeping operations with a multinational mission and integrate the country in all socio‑economic areas.  The Government appreciated the activity of the European Union Border Assistance Mission on the Moldovan-Ukrainian border and its close cooperation with relevant bodies of both States in charge of border management.
On the issue of terrorism, Moldova fully supported and participated in the global fight against that scourge, he said.  It implemented measures at the national level and complied with international instruments, such as the Global Counter-Terrorism Strategy.  It was dedicated to finalizing the talks on the comprehensive convention on international terrorism and organizing, under the United Nations auspices, a high-level conference on terrorism.
European integration was a major goal of Moldova’s foreign and internal policies and it welcomed positive developments in European Union-Moldova relations, especially after the victory of the Alliance for European Integration in the parliamentary elections in July 2009.  The new Government would rehabilitate the country’s image in the international arena and negotiate for a new association agreement with the European Union.  Its leaders were firmly committed to reforming the country’s socio-economic system and democratic process had been resumed.  He counted on the support and opportunities offered by the United Nations and its Member States to promote the country’s political and socio‑economic objectives, its integration aspirations with Europe, and to resolve the Transnistrian problem and withdrawal of foreign troops.