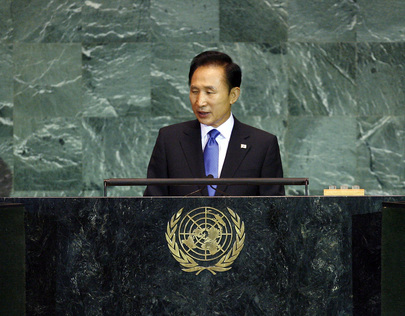 LEE MYUNG-BAK, President of the Republic of Korea, began by underscoring the special historical ties between his country and the United Nations, which had enabled it to carry out unprecedented democratic elections in 1948.  The United Nations had come to his country’s rescue only two years into its independence, once the Korean war had broken out in 1950.  He acknowledged the Organization’s invaluable support in that regard.

Regarding Republic of Korea’s international contributions, he said the country was striving to become a “Global Korea” by actively ensuring the well‑being of all human beings.  Although financial support was crucial, he said it was fundamental to overcome poverty through a development model that was fit for each country.

On the Millennium Development Goals, he said developing countries that had been most affected by the economic crisis required humanitarian assistance and development cooperation.  His country would triple its official development assistance (ODA) by 2015, and would take part in making the global partnership for more effective development cooperation even stronger.  It would also be actively engaged in promoting international peace, security and countering terrorism.

Turning to green growth, he urged all countries to participate in tackling the challenges of climate change, while appreciating the United Nations role in mustering global support and making the issue an urgent priority.  The Republic of Korea had responded proactively to climate change by adopting a “Low-Carbon Green Growth” strategy, through which it would invest roughly 2 per cent of its gross domestic product (GDP) in green growth over the next five years.  That was the best way to address global climate change and recover from the economic crisis, and for his country to prepare for the future.

Regarding other issues, he pointed out that water was the most important resource, and he urged all Assembly delegations to devote more attention to it, as it was critical to attaining the Millennium Goals.  While launching the East Asia Climate Partnership, the Korean Government had realized that providing fresh water, developing policies and infrastructures for disaster prevention were the most pressing issues.

Continuing, he said the “Four Major Rivers Restoration Project”, which provided solutions towards water security, curbed floods and helped regenerate river ecosystems, was an example of one such initiative.  It was about time that the international community created an effective governance system to address water-related issues and proposed a global water management cooperation initiative.

On nuclear non-proliferation and the Korean peninsula, he stated that he recognized the proliferation of weapons of mass destruction threatened global peace and that all countries had to cooperate to strengthen global non-proliferation agreements.  Recent initiatives put forward by the Secretary-General and United States President Barack Obama could help bring about a common understanding on the issue.  Denuclearization was crucial to paving a path towards reconciliation and unification of the two Koreas.  His country was still committed to global efforts to disable the nuclear programs of the Democratic People’s Republic of Korea, while ensuring increased dialogue.

He concluded by stating that ensuing global challenges could only be overcome through international cooperation and hoped that a new and stronger United Nations would rise to such a challenge.  His country would cooperate closely with the Organization in helping it fulfil its overall mandate and carry out its responsibilities as part of the international community in attaining a “Global Korea” and green growth.