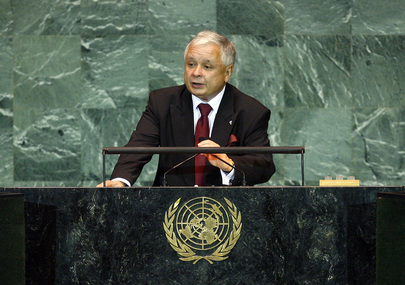 LECH KACZYŃSKI, President of Poland, said the United Nations had been created to prevent atrocities that had occurred during the Second World War and to redress the failures of the League of Nations. The United Nations had undergone various turns throughout the years, including clashes between "the socialist camp" and the free world. Twenty years ago, after the Soviet Union's collapse, Poland had gained real independence. At that time, the world believed it had found a way to solve all problems, especially economic ones, through the use of free markets and free movement of capital. However, in recent years, that "fight" had been undermined and, as such, he would focus his comments on the crisis.
Turning briefly to the issue of conflict, he said that among the many causes of conflict was the violation of States' territorial integrity, especially through the use of force, such as what had happened in Georgia.
He went on to say that he represented a country that continued to develop. Indeed, Poland was among the few countries in the European Union to record economic growth this year. The global crisis had shown that too much faith had been put in markets and banking systems. The question of preventive measures had arisen and, in that context, the United Nations had a great opportunity. New regulations for bank sector supervision were needed. There were places where banks were not under any control, which fostered criminal activity such as drug trafficking and the creation of tax havens. It was in the common interest to end such practices and no other organization was better placed than the United Nations to create international norms.
Highlighting the need to increase flexibility of International Monetary Fund and World Bank programmes, he said questions had also arisen about to how to better use agencies affiliated with the United Nations, notably ILO, which should be a place where alternative programmes to liberal development could be developed. He clarified that he was referring to the creation of programmes that would take account of the interests of workers and the balance between different social groups, especially among rich and poor countries.
Recalling comments by the President of the United States that his country would take a new approach to the United Nations, he said such efforts created a new responsibility for the Organization. The United Nations needed organizational changes that would make peacekeeping operations more effective. That did not exclude tasks taken up by the North Atlantic Treaty Organization (NATO), but the United Nations should play a leading role. On Security Council reform, he said it was an important issue and that there was a difference between what had been established 64 years ago and present day concerns.
Regarding climate change, he said richer countries must realize that assistance should be provided to weaker States. Tackling the issue should not make development easier for some and more difficult for others. In addition, international terrorism was an important problem, as the situations in Afghanistan and Pakistan had demonstrated. The United Nations could play a greater role in that regard. Finally, he had heard today that the United Nations was entering a new phase. That would be a test of its greatness.